Where are they now? A look back at the Winnipeg Jets 2016 draft class

Looking back at the Jets 2016 draft in Buffalo.

Coming off their best draft to date in 2015 the Jets had a disappointing 2015-16 season as they failed to make the playoffs for the fourth time in five seasons since relocating from Atlanta.  However despite the Jets season ending on April 9th the mood by the end of the month in The Peg was anything but sour as they won, courtesy of the lotto system, the opportunity to pick 2nd overall which was a nice jump from the 6th spot where they were originally slated to draft.

When it was Jets GM Kevin Cheveldayoff’s turn to step up to the podium there was little doubt that he would be selecting a tall Finnish kid from Tampere named Patrik Laine and that is just what he did.  Less than a week later Laine signed his three-year entry-level contract with Winnipeg. 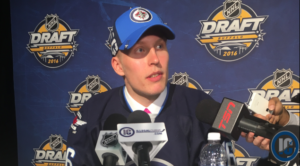 The purpose of these series of articles is to look back at the Jets selections over the years and determine where are they now.  Well even if you don’t really follow the Jets you don’t need me to tell you where Patrik Laine is right now.  Well maybe based on the fact he is still without a new contract as an RFA you’d appreciate me informing you of that but the point I am making is that it has been well documented what the Finnish Phenom with a shot like no other has been up to the last three years here in Winnipeg.  Whether it was setting an NHL record for longest points streak by a teenager, winning a Manitoba man a million dollars when he scored five goals in one game, becoming the fourth fastest player to score 100 goals, or having seven of the 20 hat tricks the Jets have scored since relocation, his exploits have been well documented.

About the only question folks have, as I indicated above, is what kind of contract the RFA is going to sign with the Jets.  Will it be a bridge deal (my thought is yes) or will he sign long-term?  This will likely remain unknown until sometime in September.

Winnipeg moved up in order to select 6’7″ defenceman Logan Stanley of the Windsor Spitfires who was playing in the OHL which prompted many to wonder if this was a reach or whether he would turn out to be a diamond in the rough.  Of course it is hard to evaluate a prospect without more data.  Stanley would return to junior following his draft year, sign his three-year ELC with the Jets in December and then suffered a torn meniscus in his right knee in mid January which would require surgery and force him to miss four months.  The good news for Stanley was that he was 100% healthy by the time the Memorial Cup got underway with Windsor as the host city and he helped his team win the 99th Memorial Cup Championship.  Stanley would finish his junior career with the Kitchener Rangers which was his best season from an offensive standpoint.

Stanley began his pro career as one of the final cuts from Jets training camp before he was assigned to the Moose to start the 2018-19 season.  He would play in 73 games for Manitoba with his three usual partners on the right side being (in no particular order): Sami Niku, Tucker Poolman and Nelson Nogier.  With Niku and Poolman likely up with the Jets next season there is a good chance he and Nogier will be getting big minutes together in the AHL for 2019-20.  Getting back to his rookie campaign I thought he got quite a bit better from the start of the season to when it concluded with the Moose just falling short of a playoff spot.  With all the injuries on the Jets blueline Stanley became someone the Moose coaching staff relied upon to play big minutes (I believe Coach Vincent said he was using him 25+ minutes during their California road trip).  Stanley has areas in his game that need improvement but he is still just a (soon to be) second year pro and that is largely the purpose of why you play prospects on an AHL team.  As I indicated above you can expect him to be playing really big minutes for Manitoba this coming season.

As I wrote above the Jets included this pick in the Andrew Ladd trade that netted them the upgrade in the 1st round.  With the selection the Flyers took Pascal Laberge who was playing in the QMJHL and spent last season playing for Philadelphia’s farm team.

This was the second pick Winnipeg gave up as part of the trade with the Hurricanes to acquire Jiri Tlusty during the 2015-16 season.  Carolina drafted winger Matt Filipe who was playing in the USHL at the time of the draft and currently plays college hockey for Northeastern University.

This 79th overall pick was the other pick the Jets acquired from the Flyers when they moved up in the 1st round.  Winnipeg used it to select smooth-skating defenceman Luke Green of the Saint John Sea Dogs of the QMJHL  The Nova Scotia product would have his best season in junior following his draft year from a points perspective and even signed an amateur tryout offer with the Moose which saw him play four games.  Green was at the Jets Young Stars Tournament in mid September of 2017 when he suffered an upper-body injury.  The GM of his junior team and former NHL goalie Jocelyn Thibault indicated that Green had “dislocated his shoulder” and could be out “close to 20 weeks”.  Four days later Winnipeg signed him to a three-year ELC.

His first season as a pro had to be similarly frustrating for the rookie who played just 11 games before a concussion in a game against Stockton knocked him out of the lineup for the rest of the season.  Green will have an excellent opportunity to play a bigger role with the Moose this upcoming season.

The Jets selected the big defenceman from Helsingborg, Sweden who was playing with HV71 and in all my years of attending NHL drafts I’m not sure I’ve seen a happier kid at the podium.  He would spend one more season in Sweden following his selection by Winnipeg before he moved to North America to pursue his pro dream on this side of the pond in 2018-19.  Cederholm signed an AHL deal with the Moose in July of 2018 playing nine games for Manitoba and 25 for Jacksonville of the ECHL.  He was in attendance at the Jets rookie Development Camp this past July and it will be interesting to see what happens with him moving forward.

Cederholm is currently without a contract.

With this selection the Jets took their second ever Manitoban in six drafts when they called out the name of Jordy Stallard of Brandon, Manitoba who was playing in the WHL for the Calgary Hitmen.  Following his draft year he was traded from Calgary to Prince Albert but was hurt after just eight games with his new squad which knocked him out for the remainder of the 2016-17 season. Stallard had a bounce back campaign in his fourth WHL season finishing the season with 44 goals and 47 assists for 91 points in 72 games but when it came time for the Jets to offer him a contract they chose to not sign him which made him eligible to return to the NHL Draft in 2018.

With their final selection of this draft the Jets selected goalie Mikhail Berdin from Ufa, Russia who was playing for the Russian U-18 Team.  He would head to the USHL after being drafted by Winnipeg playing in South Dakota for the Sioux Falls Stampede.  In his second season with the Stampede he scored an empty net goal from behind his net and celebrated with perhaps the most epic celebration of all time.  As we would later learn when he was based in Winnipeg his stick handling isn’t just a trick but instead a very important tool in his toolbox.

Berdin turned pro in May of 2018 signing a three-year ELC with the Jets.  As the Moose had Eric Comrie and newly signed (last summer) Ken Appleby in the fold in order for Berdin to get game action he was assigned to the Jets ECHL affiliate in Jacksonville.  When Eric Comrie was recalled to the Jets for an injured Laurent Brossoit it was Berdin who started to get the call between the pipes from Coach Pascal Vincent.  Many nights his athleticism and moxy alone would be worth the price of admission to Bell MTS Place.  And as I indicated above we began to see on a nightly basis just how effective his stick handling could be and what an asset it was to his teammates as you can see from this clip:

Moose coach Pascal Vincent on Mikhail Berdin playing back-to-back games “We know it takes a lot of energy for him to play a hockey game cause he’s not just a goaltender. Sometimes he’s also a defenceman…..”. And we’ve got just the GIF to illustrate. pic.twitter.com/YBB4QoFkIe

As a result of him splitting time between the AHL and ECHL the rookie goaltender was able to play in 51 pro games which is a very good way to start your career. You can sense the hunger for more from this prospect. He will likely split the Moose net with Eric Comrie for 2019-20.

The Jets flipped this pick to the Habs for Montreal’s 7th round pick in 2017 (Wpg took defenceman Croix Evingson from Anchorage, Alaska who is playing college hockey at UMass-Lowell).  With this pick Montreal drafted Arvid Henrikson a Swedish defenceman who spent last year with the Austin Bruins of the NAHL (the team his countryman and Jets 7th rounder from 2013 Marcus Karlstrom played for during his one year in North America). Henrikson is set to play college hockey with the Lake Superior State University Lakers next season.

Next up: We look at the 2017 NHL Draft in Chicago on Monday.