2016 6th round pick Mikhail Berdin heads to the USHL 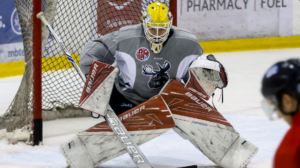 Russian goalie Mikhail Berdin was drafted towards the end of the NHL Entry Draft this past summer in Buffalo and was relatively unknown when Winnipeg selected him 157th overall.

He arrived in Winnipeg in advance of the Jets prospects heading to Penticton, B.C. to participate in the Young Stars Tournament.  He started one game for the prospects and split another with prospect Jamie Phillips.  He was at Jets training camp before he was assigned to the Moose by Winnipeg back on October 1st and spent the week practicing with the AHL squad.

It was announced by the Moose today that Berdin will report to the Sioux Falls Stampede of the USHL.  For those wondering, the USHL stands for United States Hockey League which is a Tier I junior hockey league.