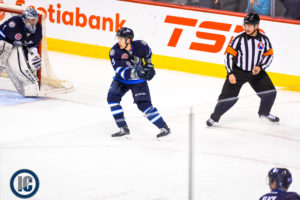 As if it hasn’t been a busy enough day the Jets announced that they have signed 2016 3rd rounder (79th overall) Luke Green to a three-year, entry-level contract.  As I reported last week Green, who was sent back to his junior team, will be out for some time after suffering an injury at the Jets Young Stars tournament.

The Winnipeg Jets announced they have agreed to terms with defenceman Luke Green on a three-year, entry-level contract with an average annual value of $846,700.

Green, 19, had 37 points (5G, 32A) in 60 games last season between Saint John and Sherbrooke of the QMJHL before he recorded one assist in four games for the AHL’s Manitoba Moose. The native of Bedford, Nova Scotia has played three years in the QMJHL and has 108 points (21G, 87A) over 121 games. Green began this year at Winnipeg’s training camp, but was returned to the Sherbrooke Phoenix on Sept. 21, 2017.

Green was drafted by the Jets in the third round (79th overall) of the 2016 NHL Draft. He’s the third of the Jets’ six selections from the 2016 NHL Draft to sign an NHL entry-level contract, joining forward Patrik Laine and defenceman Logan Stanley.