Jets prospect out for the season. 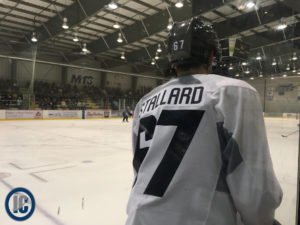 It has been a tough month for Jets prospects.  At the end of January it was announced that Logan Stanley had surgery to repair a torn meniscus in his right knee and today we learn that 2016 5th rounder Jordy Stallard underwent shoulder surgery and will be done for the rest of the season.  In 40 games for the Hitmen/Raiders he has 14 goals and 23 assists.

Here is party of the release from the Prince Albert Raiders:

Prince Albert Raiders centreman Jordy Stallard will be out for the remainder of the season.

The 1997-born veteran from Brandon, MB underwent shoulder surgery on Monday. Stallard suffered the injury on January 22 in Calgary against the Hitmen. He is expected to be ready for the start of training camp in August.

Stallard was acquired by the Raiders at the WHL Trade Deadline from the Hitmen. The 6’1”-centre made an immediate impact with the Raiders, picking up 10 points in eight games. He was hitting his stride before being injured, registering four goals and three assists in the last four games.