Laine accomplished the feat in the 1st period against the Hawks. 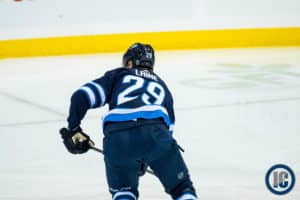 Just 1:43 into the 1st period of tonight’s Jets and Hawks game Finnish sniper Patrik Laine scored his league leading 20th goal of the season to open the scoring.  Not only was it his 20th in game 24 but it was also the 100th goal of his NHL career.

Laine at (20 years, 224 days) is now the fourth youngest player (according to NHL PR) to accomplish this feat behind:

Fewest team games to reach 20-goal mark in a season:

Quite a month for Patrik Laine who has scored 17 goals in the month of November.