Winnipeg Sun:  Byfuglien, Morrow out and Niku and Schilling in for Jets vs Blackhawks.  Ken sets up tonight’s game action.

The Athletic Winnipeg: Finding Patrik Laine: The incredible origin story of the Jets eccentric star. (Paywall). Murat went deep on this look at the Jets sniper. 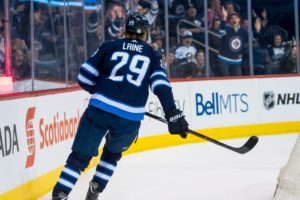 Illegal Curve: Jets vs. Blackhawks pre-game report. The Jets held an AM skate today in Winnipeg as they got ready to face Chicago at Bell MTS Place tonight at 7 pm. Includes projected lines, D pairs and starting goalie as well as audio from Cameron Schilling, Sami Niku and Mark Scheifele.

TSN: Third period an area of concern for Jets.  Paul Edmonds and Brian Munz look ahead to the Jets’ matchup against the Blackhawks and take a closer look at Winnipeg’s struggles in the third period as of late and Jonathan Toews’ return to his hometown.

TSN: Injuries the dominant topic on Thursday morning.  Dustin Byfuglien and Joe Morrow will both be out of the lineup tonight as the Jets take on the Blackhawks. In their place will be Cameron Schilling and Sami Niku. Sara Orlesky has more.

Illegal Curve: Coach Maurice pre-game. Topics included – Update on Joe Morrow/Dustin Byfuglien.  Status of Byfuglien.  Pairing of Niku and Schilling.  On Schilling’s experience.  What are the benefits to Niku being around the team?  What has he noticed about the Hawks since the coaching change?  On not seeing coach Q on the Hawks bench.  What has he thought of Ehlers play defensively since he joined the top line?  How would he assess the team’s overall defensively game this season?  Would he consider using Morrissey and Trouba as “mentors” for the new guys in the lineup?