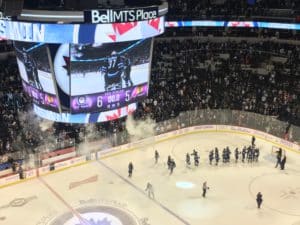 Following on the heels of a tough regulation loss on Tuesday the Jets bounced back against the Hawks and held on for a 6-5 win after building a 6-3 lead and ultimately they improved to 14-8-2 on the season.

– Jets got things rolling quickly in this one as Laine scored 1:43 into the 1st;
– Jets scored a nifty tic-tac-toe play as Ehlers gave the Jets a 2-1 lead;
– Holding a lead wasn’t easy for Winnipeg as Chicago answered each goal they scored;
– Jets again got off to a quick start thanks to Ehlers 2nd of the game 1:01 into the middle frame;
– Followed up 45 seconds later by Jacob Trouba scoring his second of the season to make it 4-2;
– Connor Hellebuyck let in a soft one from aways away to allow the Hawks to get within one;
– Another quick goal to start a period for the Jets as Laine’s second of the game gave the Jets a 5-3 lead
– Then the Jets got things rolling again with Ehlers completing the hat trick to make it 6-3;
– Game got interesting as Hawks poured on the pressure managing to score twice to make it 6-5.

Coach Maurice:  On Nikolaj Ehlers three goal game and what caught his attention from his game?  On the 29 minutes that Josh Morrissey logged for them.  What did he think of Schilling/Niku’s season debut?  On the goals against.  How did he feel about his team’s play in the D zone?  What did he learn about Byfuglien’s condition?  Knowing what they know now what does he think about putting Byfuglien back out there?  Are the concussion tests not enough?  Has he ever experienced anyone in his time in the game with someone with as hot a stick as Patrik Laine?  Is there something that he can put his finger on to identify when Laine is going?

Jets coach Paul Maurice confirms that Dustin Byfuglien has a concussion.  He is on IR for at least a week.

The Jets practice out at the IcePlex on Friday at 11 AM as they get ready to play.