Where are they now? A look back at the Winnipeg Jets 2014 draft class

Looking back at the Jets 2014 draft in Philadelphia.

We began this short work week with a look at the 2013 Draft class which saw Winnipeg make 10 selections. Today we look back to 2014 when the Jets made a total of seven selections from inside Wells Fargo Center in Philadelphia, Pennsylvania.  As a result of missing the playoffs again the team was back selecting in the Top 10 for the third time in four drafts.

I recall during his draft year Nikolaj Ehlers had a penchant for liking tweets suggesting the Jets should draft him and many Jets fans took this as a sign that he wanted to be drafted by Winnipeg (or at least it seemed that way when the tweeters would thereafter tweet his reaction to us).  Of course it could simply have been a 17 to 18 year old kid enjoying the celebrity of being a prospective 1st round pick of an NHL team.  Regardless, with their 1st round selection Winnipeg took the Dynamic Dane who played for the Halifax Mooseheads of the QMJHL (he put up 104 points in 63 games during his draft year).  Ehlers would sign his first pro deal in September of 2014 when he inked a three-year ELC with Winnipeg.  The pride of Aalborg, Denmark would spend one more season in junior where he had his second 100+ point season which included a 33 game points streak. 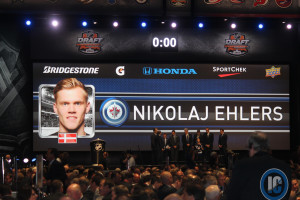 Ehlers offensive talent, which he displayed in junior, continued as he made the jump to the NHL increasing his goal total year after year (except this past season due to missing 20 games with an injury).  Provided Ehlers stays healthy he should be able to produce between 30-35 goals per season and maybe with that in mind the Jets signed him to a seven-year contract extension back in October of 2017.  Perhaps inspired by his new contract he did something that hadn’t been achieved in the previous six seasons here in Winnipeg when he scored the first ever away hat trick for the Jets in a game against the Oilers in Edmonton (Ehlers has four of the Jets 20 hat tricks to date which is second best on the team). Even though Ehlers has been snakebitten during the post season going 21 games without a goal you cannot question his desire to help his team win as best exemplified when he played Game 6 against the Blues on what we later found out was a fracture he had sustained blocking Colton Parayko’s shot in Game 5.

Patrik Laine talking about what he’ll be doing this summer. “Things a 20 year old guy would do…”

This pick was well traveled.  Traded by Winnipeg to Minnesota for Devin Setoguchi in July of 2013, it was subsequently part of the Wild/Sabres trade which saw Matt Moulson and Cody McCormick go to Minnesota for Torrey Mitchell and picks (including this 2nd round selection).  The Sabres thereafter traded it to the Capitals and Washington used it to select goalie Vitek Vanecek who currently plays in their minor league system.

While the Minnesota Wild may be the Jets closest geographic rival that hasn’t stopped the team in Manitoba from drafting kids from Minnesota which is exactly what they did with the third round pick taking right shot defenceman Jack Glover who was playing for the U.S. National Under-18 Team in the USHL.  Glover played four seasons at the University of Minnesota but was never tendered a contract by Winnipeg.  After Glover’s college career ended he played eight games in the ECHL with the Jets affiliate in Jacksonville and would spend the majority of last season with the Icemen, aside from one game he played with the Moose after signing a PTO in November of 2018.

After the Jets took Nic Petan from the Winterhawks in 2013 they went back to that WHL powerhouse when they selected the California kid Chase De Leo with the 99th pick of the draft.  Petan wasn’t De Leo’s only connection in Winnipeg as he was childhood friends with the Jets other 2013 2nd rounder Eric Comrie.  In fact the two had made a pact to play together (or against each other) in the NHL and while that hasn’t yet been fulfilled (at the same time) they did manage to play together for the Moose in their rookie season in their home state of California.

De Leo played one full season of junior after being drafted before he signed his first NHL deal with the Jets in June of 2015.  He had a pretty good season on a pretty bad Moose team in 2015-16 finishing one point back of the team scoring lead.  De Leo was also able to play his first couple of games in the NHL that season against Vancouver and the team he grew up cheering for, the Anaheim Ducks (I guess I should insert some sort of dramatic music here).  He would spend the remaining two seasons playing for the Moose and it appeared his NHL dream was getting farther and farther away in Winnipeg as more prospects came into the Jets pipeline.  In June of 2018 the Jets dealt De Leo to the Ducks for Nic Kerdilies in a trade that was easily won (in hindsight) by Anaheim.  De Leo had his most productive season as a pro with their farm club in San Diego and managed to get into one game for the Ducks.  He will also get a boost as the new coach in Anaheim is his coach from last season in San Diego (Dallas Eakins).  Conversely, Nic Kerdiles played three games for the Moose, basically missed the entire 2018-19 season due to various injuries and isn’t expected to play pro hockey again.

It is worth pointing it out again that De Leo was excellent in this community and specifically noteworthy was his support of the Winnipeg Humane Society.  Whether it was the Moose Backyard Rink (when the temps are usually very cold) or the Moose day at the Zoo, he certainly embraced his time in Winnipeg.

The Jets got this pick (along with a 7th in 2013) as a result of the trade the previous season from New Jersey during the 2013 season when they sent Alexei Ponikarovsky to the Devils.

With their pick of right shot defenceman Nelson Nogier from Saskatoon, Saskatchewan the Jets continued to mine the Saskatoon Blades for talent (after taking Sutter & Lipon from them in 2012).  Nogier was traded during the season after being drafted from his hometown team to the Red Deer Rebels where he would play one full season before finishing his junior career.  With his time in junior over the Jets signed him to a three-year ELC in June of 2016.  The 2016-17 season would prove to be an interesting one for the prospect as he played 60 games in the minors with the Moose and remarkably due to the Jets being decimated on the blueline got a chance to play in 10 games for Winnipeg in his rookie season.  Fresh off a successful rookie season disaster struck the young Dman as he was knocked out of the Moose lineup to start 2017-18 in the first shift of the first exhibition game.  Nogier ended up playing just 13 games that season but bounced back in 2018-19 playing 74 games for Manitoba and again getting a chance to play in the NHL with the Jets in one game.  Nogier was an RFA this summer and was re-signed by the Jets to a one-year, two-way deal.

The 2019-20 season should be a big one for him as there is plenty of opportunity to play big minutes for the Moose and earn himself another shot in the NHL with the Jets.

Back to the USHL for the Jets with this pick as they selected C.J. Suess from the Sioux Falls Stampede.  Suess would spend the next four seasons playing college hockey with Minnesota State U – Mankato.  In his final year of college Suess was named WCHA Offensive Player of the Year, a first-team All-WCHA selection and a Top-10 finalist for the Hobey Baker Award.

Suess signed his first pro deal with Winnipeg in March of 2018 (and an ATO to play with the Moose for the rest of that season). Suess would play six games with the Moose on that ATO before getting his rookie season kicked off in 2018-19.  His first pro season would begin with a bang as he netted five goals in his first six games with Manitoba before going cold (one goal in his next 17 games).  Just as he was heating up again (two goals in three games) he got into a post-whistle scrum which ended up with him sustaining an injury that would end his season. Suess and the Jets agreed to a one-year, two-way deal in May of this past year.

As mentioned above this pick was part of the trade between the Jets and Caps.  Winnipeg made their first selection from Russia as they took forward Pavel Kraskovsky of Yaroslavl.  I believe he never came over to North America to participate in a Jets Development Camp and never signed a contract with Winnipeg.  He is currently playing with Lokomotiv Yaroslavl of the Kontinental Hockey League (KHL).

The Sens acquired this pick from the Jets for their 6th rounder in 2015 (which was not the pick the Jets used to select Mason Appleton FYI) but the Jets did use it in a trade with the Hurricanes to acquire veteran defenceman Jay Harrison.

Ottawa used the pick to take Kelly Summers from Golden Lake, Ontario, Summers played four years of college at Clarkson University before joining the Adirondack Thunder of the ECHL.

This pick was part of the trade mentioned earlier between Winnipeg and Washington.

The Jets made their first ever selection from the BCHL when they took Langley Rivermen forward Matt Ustaski with their final selection.  Ustaski would go on to play four seasons at the University of Wisconsin before the Illinois product turned pro in 2017-18. During his first pro year, Ustaski played 14 games in the ECHL with the Jets affiliate in Jacksonville as well as a single game for the Moose.  Ustaski played just seven games in 2018-19 with the Icemen of the ECHL.

It was an event that took place outside of Wells Fargo Center (it was actually across the street at Citizens Bank Park) when host of the Illegal Curve Hockey Show Drew Mindell (@ICdrew) dove for a walk off two-run home run by Chase Utley in the 14th inning.  Drew missed it but he and the guy who caught the ball had a good laugh and he even had a couple of folks later in the night ask to take their pic with him when they found out he was the dude who missed grabbing the home run ball.

Next up: We look back to the 2015 NHL Draft which took place in Sunrise, Florida.

Where are they now? A look back at the Winnipeg Jets 2013 draft class
All 38 Mark Scheifele goals from the 2018-19 Winnipeg Jets season