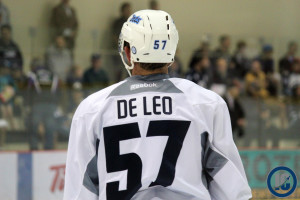 The Winnipeg Jets announced that they have signed 2014 fourth round pick.

The Winnipeg Jets are pleased to announce they have agreed to terms with forward Chase De Leo on three-year, two-way, entry level contract with an average annual value of $875,000.

De Leo, 19, completed his fourth WHL season with the Portland Winterhawks amassing 39 goals and 84 points in 67 regular season games and added seven goals and 19 points in 17 playoff games. Over his WHL career, he had 110 goals and 251 points in 279 games. De Leo played for the United States at the 2015 IIHF World Junior Championship and helped Portland win the WHL Championship in 2012-13.

He was selected in the fourth round, 99th overall by the Jets at the 2014 NHL Draft.