Note:  The Wild released their pre-season schedule yesterday and while we don’t have the Jets yet (expecting it soon),  Minnesota will play Winnipeg twice.  First game is September 22nd in the ‘Peg and then over in St. Paul on the 27th.  The good news is that the Vikings are playing the Chargers that day so you could see NFL football at noon and the Jets/Wild at 7 pm.

Winnipeg Sun:  Pending UFA Jim Slater says ‘Things haven’t picked up” with Jets.  Will the longtime Thrashers/Jets centre be back in the fold?  He was the top Jets player in the face off circle but will that be enough to get a few more years? 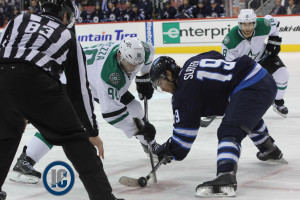 Illegal Curve:  Chase De Leo to a three-year, two-way, entry level contract.  He’s from California and was drafted 99th last year.  Read the full release from the Jets.  You can also read what the local papers (for the Portland Winterhawks) had to say.

TSN 1290 Winnipeg:  Hustler and Lawless.  De Leo says he is excited to get to Winnipeg from Florida, and looks forward to improving his game.