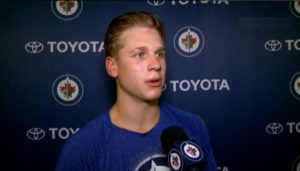 The Jets news keeps rolling in today. After it was released earlier that Grant Clitsome was retiring the team has announced that they have signed one of their 2014 draft picks.

The Winnipeg Jets announced they have agreed to terms with 2014 fourth-round draft pick Nelson Nogier on a three-year, two-way NHL Entry-Level Contract worth an average annual value of $771,700.

The Jets selected the Saskatoon, SK native 101st overall at the 2014 NHL Draft in Philadelphia after playing for the WHL’s Saskatoon Blades. He has played in two Memorial Cups, one with each Saskatoon and Red Deer. Nogier was named the WHL’s Scholastic Player of the Year in 2013-14.