The Dynamic Dane will be a Winnipeg Jets forward for quite awhile. 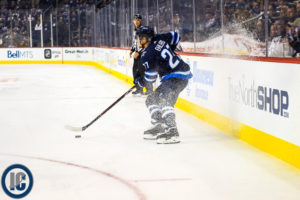 If Nikolaj Ehlers walked into Bell MTS Place with a big smile on his face this morning it is because the Jets winger has reportedly signed a seven year contract extension for 42 million dollars.  He had one year left in his entry level contract paying him $894,167 according to CapFriendly and this will see the speedy and talented winger get quite the pay increase.

He is entering his third season with Winnipeg and his point totals jumped from 38 in his first year to 64 last season. If his production continues along this trajectory it will be quite the deal for the Jets.

Update:  The team has now officially confirmed the deal.

Nikolaj Ehlers:  On how he feels about his new contract.  When did talks start?  Why is he excited to stay here long term?  A big night for Danish hockey.  Time for the Jets to get to work.  Why did he want to get the deal done before the season started?

On the new contract:  “Staying here for an additional seven years is amazing.  I’m pretty excited”

Why he wanted to stay long term:  “This team, this organization, this city, everything.  From day 1 I was happy here.  Everybody helped me getting settled from the start.  Its amazing playing in front of all these fans.  Winnipeg as a city is amazing. They love their hockey. I could not see any reason to not want to stay here for long term.”

Kevin Cheveldayoff:  Why was it important to get the deal done before the season began?  Why did seven years make the most sense?  On the message (locking up another player long term) it sends to the group.  How happy is he about the number he got Ehlers at?  On how this and the Scheifele contract set the Jets up for the future.