Jets ink their 2014 1st round selection. 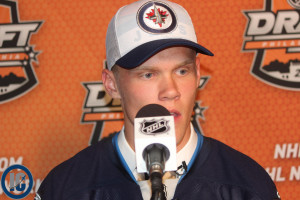 The news just broke from Gary Lawless of the Winnipeg Free Press:

The Winnipeg Jets announced today they have agreed to terms with forward Nikolaj Ehlers on a three- year, entry level contract with an annual average value of $1.625 million.

Ehlers, 18, played 63 games with the Halifax Mooseheads of the QMJHL last season. In that time, the Aalborg, Denmark native recorded 104 points (49G, 55A) and 51 penalty minutes. He also appeared in 16 post-season games with the club compiling 28 points (16G, 11A) and 18 penalty minutes. His impressive 2013-14 season saw him earn a multitude of QMJHL awards including: Rookie of the Year, Offensive Rookie of the Year and Best Professional Prospect along with All-Rookie Team and Second Team All-Star selections. He led all rookies in goals, assists and points and led the entire league with a plus-65 rating. Ehlers was also named BMO CHL Rookie of the Year Award which is presented annually to a Canadian Hockey League player who demonstrates outstanding achievement, sportsmanship and dedication to sport.

He was originally drafted by the Winnipeg Jets in the first round, ninth overall, in the 2014 NHL Entry Draft.