Sounds like #NHLJets and Minnesota State prospect C.J. Suess appear close to agreeing to terms on an entry level contract. Announcement could come as early as today. He is expected to join the #MBMoose.

Turns out it is a one-year ELC for $925,000.00 as per the Jets Release.  He has signed an ATO with the Moose for the remainder of the season.

CJ Suess was drafted by the Jets back in 2014 in the 5th round of the NHL Entry Draft.  At the time he was drafted he went by Franklin but he switched his last name last year to Suess. 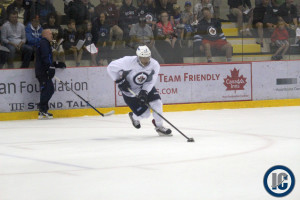 The product of Forest Lake, Minnesota has played four seasons at Minnesota State U – Mankato finishing this past season with his most productive effort with 22 goals and 21 assists in 40 games.  He was named WCHA Offensive Player of the Year, a first-team All-WCHA selection and a Top-10 finalist for the Hobey Baker Award.

On last week’s Illegal Curve Hockey Show on TSN 1290 Winnipeg we spoke with Chris Peters who is an NHL Draft and prospects analyst for ESPN.  This is what he had to say about the Jets prospect:

This signing should help bolster a Moose team that is dealing with numerous injuries at forward.