Note III:  The Jets announced they have signed 2014 5th rounder C.J. Suess to a one year ELC.

Winnipeg Sun:  Wheeler takes responsibility: ‘Bad day’ for Jets captain led to scuffle in practice.  The Jets captain fell on his sword today following the Jets optional skate taking full responsibility for the ‘dust up’ that occurred yesterday during practice between himself and Ben Chairot.  Ken also sets up the game. 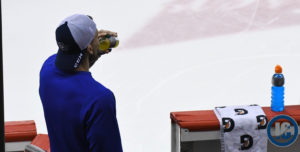 Winnipeg Free Press: Wheeler says he and Chiarot have made up.  (Paywall).    No point dwelling on this considering they’ve got to focus on the best team in the NHL (my opinion) coming into their house tonight.

Sportsnet: Blake Wheeler takes full responsibility for scrap at Jets practice.  The truth will generally quash a story and that was the formula used by the captain to put an end to this one.

theScore:  Jets shut down Enstrom for remainder of regular season.  If you want to go deep in the playoffs you need healthy bodies so it makes sense to give the veteran some time to get healthy again.

NBC Sports:  Kyle Connor’s rookie season has been quietly impressive.  He continues to light the lamp this season but because of the rest of the big names on this roster he tends to be the forgotten man.  He is quickly making it hard to ignore what he is doing.

Illegal Curve: Jets vs. Predators pre-game report. Take a look at what happened at the rink this morning as Winnipeg gets ready to face Nashville at Bell MTS Place tonight with pre-game scrums with Blake Wheeler and Josh Morrissey as well as a Tobias Enstrom health update.

Illegal Curve: Coach Maurice pre-game scrum.   Topics included – Shutting down Enstrom for regular season.  On Poolman playing.  How have they continued to drive without being comfortable.  Importance of securing a playoff spot with a win tonight.  On the “extra stuff” that happens after the whistle.  On Blake Wheeler taking responsibility for yesterday’s ‘dust up’. Clarification on Enstrom.