Nogier is back for another season in the organization. 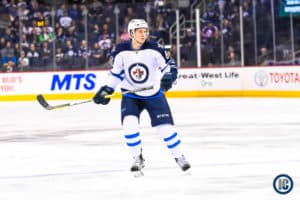 Right-shooting defenceman Nelson Nogier from nearby Saskatoon, Saskatchewan is back in the fold according to the fine folks at CapFriendly who have indicated that the Jets 4th round pick in 2014 was signed to a one-year, two-way deal for the 2019-20 season worth $700,000 in the NHL and $80,000 in the AHL.

With Sami Niku and Tucker Poolman expected to be up with the big club next season it will be Nelson Nogier who will be playing big minutes in his fourth pro season along with Logan Stanley for the Manitoba Moose of the AHL.  He has played 11 games for the Jets since he turned pro including one game last season.

Also according to CapFriendly “Nogier will be an RFA with Arbitration rights next summer when his new deal expires.”.

Update: The Jets confirmed it on Tuesday AM.