Where are they now? A look back at the Winnipeg Jets 2012 draft class

Looking back at the Jets 2012 draft in Pittsburgh.

After we got things started with the 2011 Draft class in St. Paul we continue our look at the Jets drafting history with a look back at the 2012 Draft in Pittsburgh.

The Jets used their 9th overall pick to select a talented defenceman from Rochester, Michigan named Jacob Trouba who was patrolling the blueline for the U.S. National Development Team in the USHL with a commitment to play for Red Berenson and the University of Michigan Wolverines. 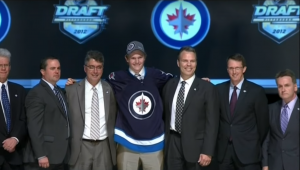 Trouba was a one and done after his freshman season in college signing his three-year entry-level contract with Winnipeg in April of 2013.  Once his ELC expired he was an RFA but getting a new deal done in 2016 wouldn’t be easy as we learned Trouba’s camp had requested a trade in May of that year, and he would hold out until November and then ultimately sign a two-year bridge deal.  When that deal expired in 2018 he went to arbitration where he received a one-year deal which was ultimately the last year he’d spend playing for the Jets.  Despite the somewhat rocky relationship off the ice, on the ice with Winnipeg he eventually formed a top pair tandem with Josh Morrissey.  Despite their success together it wasn’t enough to get Trouba to sign long term in the ‘Peg and he was dealt to the New York Rangers ahead of the 2019 NHL Draft.

The Jets cast their eyes to the WHL for their second round pick selecting hard hitting forward Lukas Sutter who played for the Saskatoon Blades and was coming off a productive second year of junior hockey.  As we saw in 2011 when the Jets took Adam Lowry, hockey pedigree does have its cache, and being from the Sutter family which had sent six sons to the NHL in the 70s and 80s means most of Canada knows your name.  But that also comes with the weight of expectations and when the time came for the Jets to either sign him or not they choose the latter option which allowed Sutter to re-enter the NHL Draft.  Sutter was taken by the Islanders in the 7th round of the 2014 Draft.

He split the 2014-15 between the AHL and ECHL, played a year of University hockey in Saskatchewan and appears to be out of hockey at this time.

The next round the Jets flipped over to the OHL for quick skating Scott Kosmachuk from Toronto who was playing for the Guelph Storm.  After four seasons in junior he made the jump to the pro ranks signing a three-year entry-level contract with the Jets but playing for their AHL affiliate in St. John’s in 2014-15.  He came west with the team and spent the next two seasons here in Winnipeg primarily playing for the Manitoba Moose but also getting into eight games with the Jets finishing with three assists.  Those remain his only NHL games to date.  Kosmachuk wasn’t signed by the Jets when his ELC expired and instead headed east to play in Hartford of the AHL (coincidentally with former Moose coach Keith McCambridge).  He spent the 2018-19 season in the AHL with Colorado’s affiliate and was dealt to the Washington Capitals as part of the Andre Burakovsky trade this past July.  He is currently a UFA.

The Jets didn’t have a 4th round pick as they had sent it plus Danick Paquette (Thrashers 2008 3rd rounder) to the Washington Capitals almost a year earlier when they acquired local lad Eric Fehr from nearby Winkler, Manitoba in July of 2011.  Trivia:  Fehr was one of the four players who modeled the brand new Winnipeg Jets uniform when it was first revealed in September of 2011…who were the other three?

With a dearth of goaltending depth in the organization the Jets selected Connor Hellebuyck who was playing Tier II junior hockey for the Odessa Jackalopes of the NAHL.  Hellebuyck was committed to UMass-Lowell where he would play two seasons which included winning two Hockey East Championships, two tournament MVPs and the Mike Richter Award as the top goaltender in college hockey.

In April of 2014 Hellebuyck signed a three-year, entry-level contact with the Jets.  He spent his first pro season with the IceCaps in what would be their final season out east playing in 58 games.  After starting the 2015-16 season with the Manitoba Moose he got the call to the NHL when Ondrej Pavelec was hurt in November of that season and ended up getting into 26 games.  Once the 2016-17 season began he wouldn’t look back at the AHL sticking with the big club and earning himself the starter’s net.  The team and him agreed to a one-year deal for 2017-18 and what a year it was as he became the first goalie in franchise history to win 40 games, he set the record (44) for most wins by a U.S. born goalie in a season and was a finalist (which turned out to be runner-up) for the Vezina Trophy for top goalie in the NHL (he was the first finalist in Jets/Thrashers history).  Hellebuyck also led the Jets to the Western Conference Final that season.  Ultimately he and the Jets agreed to a six-year deal worth $37,000,000 through to the 2023-24 season.

For the second time this draft the Jets selected a player from the Saskatoon Blades of the WHL as they chose centre Ryan Olsen, a product of Delta, BC.  After being drafted by Winnipeg he would spend his final two seasons of junior hockey playing for the Kelowna Rockets.  He signed his first pro contract in December of 2013 which was a three-year ELC which saw him join the IceCaps for their final season in St. John’s and then two more here in Winnipeg with the Manitoba Moose and while he did see some success moving from centre to wing he wasn’t signed once his ELC expired.  He didn’t get into any NHL games for the Jets.  He bounced around between the AHL, ECHL and Europe and spent last season with the Blues affiliate in San Antonio.

With their final selection the Jets grabbed another goalie taking Jamie Phillips from Caledonia, Ontario who played for the Toronto Jr. Canadiens in the Ontario Junior Hockey League.  He was committed to playing college hockey for Michigan Tech where he would spend four seasons and finish with the most wins in school history, best save % and GAA and that ain’t too shabby considering Hall of Famer Tony Esposito is also alumni at that college.  In his final college season Phillips was a nominee for the Mike Richter Award (which was won by Canucks prospect Thatcher Demko who played for Boston College).

Phillips was signed to a two-year ELC contract with the Jets in July of 2016.  He would begin his pro career in 2016-17 in the ECHL with the Jets affiliate at the time the Tulsa Oilers where he would have a blazing hot start going 10-0-0, being recognized as the ECHL goalie of the month and was the starting goalie for the ECHL All-Star game.  He would bounce back and forth between the ECHL and AHL during these two years.  Without question the most memorable moment (to me at least) was when he got into a fight during a game at Bell MTS Place between the Moose and Admirals on February 21, 2018 when he took on Anders Lindback at the end of the contest.  He would not be signed by the Jets organization after the 2017-18 season concluded and spent last season in the ECHL after signing with the Hurricanes affiliate in Charlotte.  He was signed for the 2019-20 season by the Coventry Blaze of the Elite Ice Hockey League in the United Kingdom.