The Moose move Olsen to the wing.

The Jets drafted Ryan Olsen back in 2012 at the draft in Pittsburgh in the sixth round (160th overall).   He was a member of the Saskatoon Blades when Winnipeg took him at the draft but he was traded to the Kelowna Rockets.  He played two more seasons in the WHL for the Rockets and the Delta, B.C. native was signed by the Jets back on December 31st, 2013 to a three year, two-way entry level contract.

He then went to St John’s where he played his first pro season in the AHL with the IceCaps in 2014-15 accumulating four goals and five assists for nine points in 60 games. His second season was the first for the reincarnated Moose here in Winnipeg in 2015-16 where he had six goals and seven assists for 13 points in 65 games. 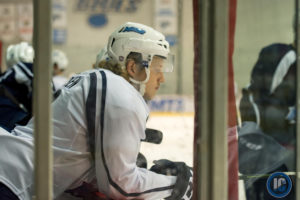 This year is his third pro season in hockey and it has come with some bumps in the road.  He had been recently assigned to Tulsa of the ECHL where he played three games in three nights before he was recalled back up to the Moose.  In his three pro seasons he has been used primarily as a centre. 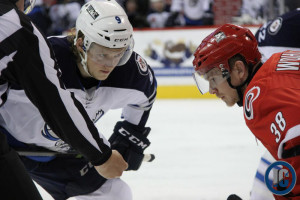 This season he had two goals in his first 21 games with the Moose.  With the Moose being deep at centre, with Jack Roslovic, Chase De Leo, Dan DeSalvo and Patrice Cormier, bench boss Pascal Vincent has recently moved Olsen to the wing.  In his last three games on the wing he has two goals including back to back games this weekend against the Wolves.

Following the win on Sunday over Chicago we spoke to Olsen and asked him what he attributes his recent success to”Confidence a bit more.  Getting on the ice a lot more too has helped.  I have a good line with Cormier and Kosmachuk, so that helps too.  Figuring out the wing as well.  Just using my size and speed, trying to get to the net and bounces are happening.” 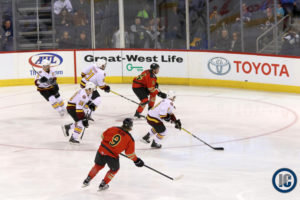 Coach Vincent later added “I think he’s got great potential to be a winger because of his speed, size, his ability to battle one on one and to win those battles”.

Another big key is discipline for the converted centre who led the Moose in penalty minutes last season but only has one minor penalty in his last six games.

We shall see how the transition goes for the big former centre turned winger and we shall see if he can keep his goal streak alive when the Moose head to Texas to face the Stars on Wednesday night.