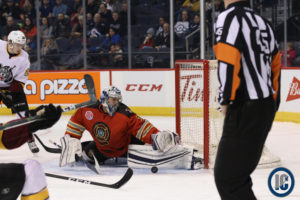 After the Moose lost a tight, 3-2 game to the Wolves on Friday night – their fifth straight regulation loss – the two teams renewed acquaintances on Sunday afternoon at the MTS Centre. Ondrej Pavelec got the call in net, looking to improve on his 7-7-2 record, 2.88 GAA, and .912 save %.

Wolves Goal (1): After a giveaway in the Moose zone, occasional Blues call-up defenceman Petteri Lindbohm took a shot from an angle, which beat a partially screened Pavelec.

Moose Goal (1): After the Wolves got caught with too many men, the Moose powerplay went to work – Connor got the puck to Glennie, who went cross-ice to Roslovic, who went back across the seam to Dan DeSalvo, who found the temporarily yawning cage. A real beauty.

Moose Goal (2): After a nice forecheck by Scott Kosmachuk caused a turnover, the puck squirted to Ryan Olsen in the slot, and he beat Wolves’ goalie Ville Husso to put the Moose up by 1.

Moose Goal (3): Scott Kosmachuk got the puck in the high slot and unleashed a wicked wrister – just over the right pad and under the blocker – to give the Moose a 3-1 lead.

Moose Goal (4): Jimmy Lodge found some space and beat a defender to the net, then deked the pants off Husso. 4-1 Moose.

G Ondrej Pavelec: To say that he was great in the first period would be an understatement – the Moose were overwhelmed, outshot 21-6, but Pavelec kept them in it until the second period when the Moose got on the board three times. Even so, they were outshot 33-15 through two periods, so he still had to be sharp. Pavelec continued his tremendous play into the third, putting an exclamation on the day with his 40th save off of Blues prospect Ivan Barbarshev – a glove hand save coming on a breakaway. He was the only reason the Moose won today, as they could easily have been down by 2 or 3 goals very early in this game.

Ondrej Pavelec flashing some leather to make his 40th save of the afternoon to keep the Moose lead at 4-1. #AHL #MBMoose pic.twitter.com/W3gV0UqlNC

C Jack Roslovic: He made an incredible feed on the Moose’s first goal. Roslovic is simply able to do things that most other players at this level don’t have the capacity to do. He creates space with his feet, can see the open man through several bodies and sticks, and reliably make the tape-to-tape pass.

LW Kyle Connor: He didn’t stand out today, but even in a game like that, you can see the skill in the little plays he makes, like taking a bad pass from his skate to his stick with ease, dishing out soft, accurate saucer passes, and cutting through the defence with his long, fluid stride and quick hands.


LW Brendan Lemieux: Lemieux is starting to turn the corner – after a few weeks of indifferent play, he’s starting to create a lot more scoring chances, and has had a number of posts and near misses. After 7 shots on goal on Friday, he had another 3 today, plus a few other chances that he put just wide. It’s only a matter of time before the offence catches up with his sneaky good play.


RW Scott Kosmachuk: After having a fantastic first period in Friday night’s game, Kosmachuk was terrific in the second period today, helping to create the Moose’s 2nd goal, and scoring the 3rd goal. When on his game, Kosmachuk is probably the team’s most gifted sniper – he has a deadly wrist shot from the slot – but consistency is something that still eludes the 22-year-old, 3rd year pro.

RW Jimmy Lodge: After a pretty quiet game, Lodge came onto the scene late with that beautiful deke for the team’s 4th goal. The 2013, 3rd round pick continues to raise his prospect status, looking faster, stronger and more confident with each passing week.