Where are they now? A look back at the Winnipeg Jets 2011 draft class

While we wait for news about the remaining RFAs left for the Winnipeg Jets to be signed and since that is not expected to happen anytime soon I figured it would be interesting (to me at least, and hopefully to you) to look back at the various Jets draft classes over the years.

First up we head just south of here to St. Paul, Minnesota where the franchise with no official name would make seven selections inside Xcel Energy Center.  Of course while the draft picks would end up wearing generic NHL jerseys we did learn the name of the new franchise courtesy of True North’s Mark Chipman who, when talking about GM Kevin Cheveldayoff making the first selection, indicated “……will make our first pick on behalf of the Winnipeg Jets.”

This was seen as an ‘off the board pick’ by Winnipeg when they selected the kid from Kitchener, Ontario who was playing in Barrie of the OHL.  It probably helped that he was coached by Jets 1.0 star Dale Hawerchuk who saw big potential in his young centre with the Colts. 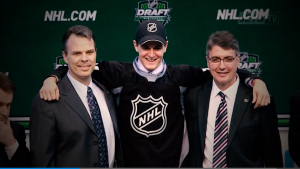 2nd round pick:  No selection

The Thrashers had sent this pick along with Ivan Vishnevskiy to the Hawks for Andrew Ladd who would be the final captain in  Atlanta and the first one for the Jets in 2011-12.  Chicago selected defenceman Adam Clendening with the 2nd round pick of Atlanta.  Hindsight is 20/20 but quite a stellar group of names to choose from including Boone Jenner, John Gibson, Brandon Saad, Markus Granlund, William Karlsson and Nikita Kucherov to name a few, who were taken after Clendening in that second round.

For this pick the Jets went to the other side of Canada when they took big centre Adam Lowry from Calgary, Alberta who played for the Swift Current Broncos of the WHL.  He came with some hockey pedigree as his dad Dave was a longtime NHLer turned coach (with the Flames as an assistant when his son was drafted by Winnipeg & currently the new head coach of the Brandon Wheat Kings of the WHL).

Lowry would spend four seasons in the WHL before he transitioned to life in the pro ranks.  He signed his ELC in 2013 playing his first full season with the Jets AHL affiliate in St. John’s.  It was quite a learning year as they went all the way to the Calder Cup Final that season.  He played his first full NHL season with Winnipeg in 2014-15 and with the exception of four games for the Moose in 2015-16 he has made the transition to the NHL full time with the Jets and has been someone the coaching staff trusts implicitly.  In 359 games for Winnipeg he has 53 goals and 60 assists for 113 points.

He has two years left in the three-year contract he signed with Winnipeg in the summer of 2018.

Winnipeg made a trade for the Habs 3rd round pick which the Jets used to select Brennan Serville who was playing defence for the Stouffville Spirit of the Ontario junior hockey league.  After four seasons of college hockey at the University of Michigan he turned pro in 2015-16 splitting the season between the Manitoba Moose of the AHL and their ECHL affiliate the Tulsa Oilers.  He only played the one season finishing his pro career with zero goals and one assist in 33 games.

While neither player (Josiah Didier & Oliver Archambault) the Habs selected with the two Jets 4th round picks have ever played a game in the NHL they both continue to play pro hockey.  Although Jets fans can take solace that the Habs missed out on Johnny Gaudreau who was taken by Calgary in the 4th round (104th overall).

The Jets went back to the WHL with their pick in the 4th round selecting Zach Yuen who played defence for the Tri-City Americans.  He spent four seasons in junior but the Jets chose not to sign him to an entry-level contract.  He was able to re-enter the NHL draft but was not taken again and ended up signing with the Toronto Marlies to an AHL deal for the 2013-14 season.  After three seasons spent playing in the ECHL he made the move to join the first Chinese team in the KHL being the Kunlun Red Star.

As the Jets had dealt away their 4th round pick (as well as a 4th round pick they had from the Habs which Montreal reacquired when they made the trade listed above) in order for the Jets to get into the 4th round they made a trade with San Jose giving up a 5th round pick and 7th round pick in the 2011 draft.  The 5th rounder taken by the Sharks was Sean Kuraly while the 7th rounder was Colin Blackwell. Kuraly was thereafter traded to the Bruins where he has become a nice piece for Boston and Blackwell got his first taste of NHL action this past season playing six games for the Nashville Predators.  The 5th round pick was one that the Thrashers had received from Florida in their final trade in 2011 (and ultimately final trade as a franchise) when they acquired it and Radek Dvorak for Niclas Bergfors and Patrick Rissmiller.  The 7th round pick Winnipeg traded away was one Atlanta had received when the Thrashers sent Fredrik Modin to Calgary back on February 28, 2011.

Back to the OHL for Winnipeg in this round as they selected forward Austen Brassard of the Belleville Bulls.  After four seasons of junior hockey he was signed to a three-year entry-level contract by Winnipeg.  He played three seasons in the AHL, two of which were with the IceCaps and one with the Moose when they moved to Winnipeg.  He spent last season in the ECHL with the Greenville Swamp Rabbits.

Atlanta had acquired this pick on January 18, 2011 in a trade that dealt Ben Eager to the Sharks.

Interestingly the 5th round pick the Thrashers had owned for this round was traded in June of 2010 for two 2010 6th round picks to the Islanders.  With the Atlanta pick in 2011 the New York team based on Long Island took a name familiar to folks around here….Brenden Kichton.  Some might recall he was not signed by the Islanders, ended up going back into the draft and was selected by the Jets in the 7th round of the 2013 NHL draft.

The newly relocated NHL team based in Manitoba picked their first Manitoban when they took goalie Jason Kasdorf who played for the Portage Terriers of the Manitoba junior hockey league.  He went the college route playing four years for RPI (Rensselaer Polytech. Inst.) and during that time became a piece of the biggest trade the Jets have made to date when they sent Zach Bogosian, Evander Kane and Kasdorf to the Buffalo Sabres back in 2015.  He went on to play one game for the Sabres after his college career ended in 2015-16 but has primarily been in the ECHL or AHL and last year played in Germany.

The Jets made their first (but as we’ve seen certainly throughout the years not their last) selection from the USHL taking Wisconsin product Aaron Harstad who was a left shot defenceman playing for the Green Bay Gamblers.  Harstad would go on to play four years at Colorado College before he turned pro in 2015-16 splitting the year with the Manitoba Moose and Tulsa Oilers on an AHL deal.  He spent the next couple of seasons playing in the ECHL before spending last year in Denmark with the Aalborg Pirates.