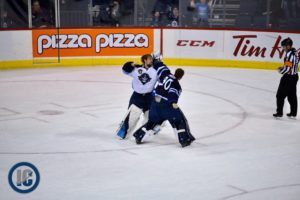 The Moose took on the Admirals in a rematch of Monday’s tightly contested affair, which the Moose lost 3-2. Although the Jets’ AHL club sits first in their division by 8 points, and first in the Western Conference, there are definitely signs for concern, as the team has struggled without top prospect Jack Roslovic. Their record with Roslovic: 24-5-3, but without him, they’re just 8-9-4. With Eric Comrie still on loan with the Jets, Jamie Phillips got his 6th straight start in goal, while former NHL’er Anders Lindback countered for the Admirals.

The first five minutes of this game started out in the Moose zone, as they faced a lot of pressure from Milwaukee, but no great scoring chances. The first good chance of the game came from the Moose – Mike Sgarbossa had the puck at the side of the net with the goalie at his mercy, but he fanned on the shot; the puck squirted free and the Moose looked ready to pounce, but the ref blew the play dead. An interference penalty on Patrice Cormier put the Moose down a man, but they killed it off without facing many chances. A slick play by Sami Niku led to a good chance – he deked a defender at the blueline, creating space for Mason Appleton, who wristed a shot through traffic which caught the right post. Brendan Lemieux drew a hooking penalty later in the first – a trend this evening – as he came through the neutral zone with speed. Sgarbossa had another great chance to bury a rebound – this time off a Lemieux one-timer, but the puck got caught in his feet and he wasn’t able to get a shot off. The Moose got their second powerplay of the game after the Admirals took a high sticking penalty due to the pesky forechecking of J.C Lipon. As the PP wound down, Buddy Robinson took a cross ice feed off his foot and directed it towards the net – the ensuing rebound came off Lindback’s pad and right back onto Buddy’s stick, and he popped the puck into the top of the net to open the scoring. A scrum broke out immediately after the goal, and Lemieux and an Admiral player got offsetting minors. The Moose carried the play through the last 15 minutes of the first period, with first period shots 12-10 in their favour, and the score, 1-0.

Just after the second period opened, the Admirals were on the powerplay following a Sami Niku slashing penalty. The opposition Admirals were able to capitalize, as two Moose defenders (Poolman and Schilling) both chased the play behind the net, leaving Mark McNeil wide open in front to bury a one-timer past Jamie Phillips. However, the Moose were able to restore the lead when Brendan Lemieux came flying down the left wing and squeeked one through Lindback to put the Moose up 2-1. It was definitely a goal that Lindback would like to have back, but it was impressive speed down the wing by Lemieux nonetheless. Lemieux then drew his second penalty of the game, and the Admirals took great exception, as they felt that Lemieux had gone down rather easily. Lemieux continued to be a focal point on the ensuing plays, as he played the right point/half-wall, and Niku looked for him a few times as the trigger man for the one-timer. The Moose didn’t score on the PP, but had a number of decent chances. Just after the powerplay expired, Lemieux wripped a shot from the slot but it sailed high over the net. Just under 13 minutes into the second, a wonderful forecheck by Jansen Harkins created the third Moose goal – Harkins took the body on an Admirals defender, grabbing the puck while bouncing off of him, and feathering a pass into the slot for Mason Appleton, who took a few steps to his right and then shot back across the grain blocker side to put the Moose up 3-1. Shots in the second were 12-10 in favour of the Admirals, but most of the good chances were coming from the Moose as they took a 3-1 lead into the intermission.

Brendan Lemieux started the third right where he left off, deflecting a shot from Charles-David Beaudoin to give the Moose a 4-1 lead. However, the Admirals narrowed the lead to two when Freddy Gaudreau circled the net, lost his checker (Sgarbossa), skated into prime position and roofed a wrister past Jamie Phillips. The Moose got the three-goal lead back just a few minutes later when Mason Appleton came down the right wing and made a nice cross-ice feed to Chase De Leo, who got two cracks at it and just put it over Lindback’s outstretched pad. The Admirals thought they had a third goal with about 12 minutes left in the third, as a shot squirted past Phillips and sat on the goal line, but the referee immediately waved his arms to signal no goal; however, after a review, the play was ruled a goal. With just under five minutes left in the game, Julian Melchiori made a terrific cross-ice feed through the seem to Chase De Leo, who one-timed it to the far side, but Lindback came across at the last possible moment and made a glorious glove save to keep the score 5-3. With the Admirals’ net empty, Mason Appleton managed to break in alone and pot the empty netter, while getting high sticked in the face in the process.

A wild ending to the Moose 6-3 win as Jamie Phillips scraps Anders Lindback in the rare goalie fight. pic.twitter.com/soWVIf7bxE

-Brendan Lemieux had one of hisbest performances of the year this season. Not only did he score two goals, but he had several other good scoring chances, and drew 2 penalties. He handled the puck like a power forward, but with the speed of a much smaller man than his 6’1, 210. He displayed a few cases of poor puck management, including one very poor choice in his own zone, but it didn’t come back to bite his team. He has 5 goals in the last 7 games, though it’s worth mentioning that he’s gone without an assist for 9 straight games.

-Mason Appleton played a great game tonight – after going 9 games without a goal, he managed to score a big one tonight – a goal scorer’s goal from the slot where he showed both patience and accuracy. It was a matter of  time for Appleton, who hit posts in each of  the last two games. He also set up the 5th goal beautifully, and iced the game with an empty netter. His game continues to grow as the season goes on, but the offensive production isn’t the same since he lost his two linemates – Nic Petan and Jack Roslovic.

-Sami Niku took a slashing call which led to the Admiral’s first goal – such is life. Niku has taken 13 minor penalties on the season – most among all Moose D – but on a per-game basis, he’s actually the one of the least penalized defenders on the team (he’s averaging one minor penalty per 4 games played). Niku didn’t get on the scoresheet tonight, but he made a few noticeable defensive plays and continued to quarterback the powerplay effectively, as always.

-Tucker Poolman had a quiet game at both ends of the ice tonight. He continues to play a top-4 role whenever he’s with the Moose, but one wonders if his time in the press box with the Jets, and shuffling between the two teams has harmed his development thus far. He skates well for a man with his (6’3) frame, and he can handle and shoot the puck, but he hasn’t been particularly influential for the Moose in many games this season, and you’re just left wanting more from a player with his billing.

-Jansen Harkins made the most of his ice time tonight, as despite playing on the 4th line, he managed to get in on the scoring, setting up Mason Appleton’s goal in the second. Harkins’ confidence appears to be growing, and you begin to wonder what kind of impact he could have with more playing time and more skilled linemates.

-Michael Spacek played an important role on the powerplay, and as always, showed good hands and passing ability. That said he had a pretty quiet night – no great chances created or finished.

Making his sixth start in a row, #MBMoose goaltender Jamie Phillips was asked about getting a win, and his first career fight #GoMooseGo pic.twitter.com/CFMbze9R0c

After a two-goal, physically charged performance, #MBMoose forward Brendan Lemieux spoke about the team around him #GoMooseGo pic.twitter.com/8fBCmIKeXJ

Defenceman Charles-David Beaudoin had two assists in the 6-3 #MBMoose win in front of a large crowd for his hometown #GoMooseGo pic.twitter.com/EkuyPZaQkU

Saturday, February 24 at Bell-MTS Place vs. the Chicago Wolves