It was superhero day at Bell-MTS Place as the Moose took on Nashville’s AHL affiliate, the Milwaukee Admirals. It was their 6th meeting of the year, with the Moose coming into to the game unbeaten thus far with a 3-0-0-2 record. With Eric Comrie and (injured) Michael Hutchinson both up with the Jets, Jamie Phillips got his fifth consecutive start in goal. 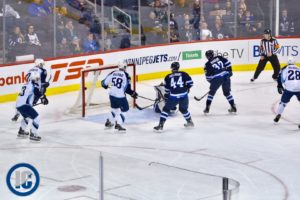 The Moose got behind early, as Freddy Gaudreau grabbed a sloppy rebound out front and slid it past Jamie Phillips to give the Admirals a 1-0 lead just a minute into the game. The Admirals added to the lead 7:15 into the first – they entered the Moose zone 3-on-2 and Julian Melchiori followed the puck carrier into the corner, leaving a 2-on-1; Jamie Phillips committed to a potential shooter in the slot, leaving Trevor Murphy wide open on the back door to find a partially empty net. 2-0 Admirals. Then the Moose were dealt what seemed like a death blow with just under 5 minutes left in the first when Gaudreau struck again, walking into the slot on the powerplay and firing a dart high glove past Phillips to make it 3-0. With a minute left in the first, Mike Sgarbossa made a nifty deke and almost scored on the backhand, but just missed wide. And with mere seconds left in the first, Sami Niku snuck in from in from the point and fed Brendan Lemieux in the slot; he wasn’t quite able to get a shot off and a scramble ensued in the slot, but the period ended without a good chance on goal. The Moose were not only outscored in the first, but outplayed, as they were outshot 14-7.

The coach shuffled the deck in the second period, putting Spacek on a line with Robinson and Sgarbossa, and Appleton down with Cormier and De Leo. The Moose came out of the gate firing, and didn’t quit all period. First, Sami Niku pinched down in the offensive zone, rounded the net and made a great set up out front for Michael Spacek, but Spacek backhanded it wide. Then, on the powerplay, Niku again fed Spacek – this time near the left faceoff dot –  and he ripped a one-timer off the cross bar. Spacek had two more chances from the same spot, but either missed just wide, or was stopped by the outstretched pad of Anders Lindback. The Moose finally got back in the game when Cam MacLise won the draw to Brendan Lemieux, who immediately fired a wicked wrister through a screen and beat Lindback high glove. The Moose continued to dominate zone time in the second period, as they seemed to be around the net with the puck more often than not. De Leo and Sgarbossa both had good chances in scramble-type plays, but neither was able to find the handle on the puck.

The Moose picked up right where they left off in the second period, as they came out in the third and outshot the Admirals 12-1. Mike Sgarbossa took a feed out front from Buddy Robinson, deked backhand-forehand, and just missed the net wide on what seemed like a sure goal. Then off a faceoff, Brendan Lemieux fired another wrister and rang it off the post. Not long after, the Moose were able to capitalize, as Mason Appleton entered the zone smoothly, pulled up and rimmed the puck off the boards to Buddy Robinson behind the net; Buddy made a very cheeky, no-look backhand pass out front to the previously snakebitten Mike Sgarbossa, and he beat an unsuspecting Lindback to get the Moose within one. The Moose almost tied the game a few minutes later, as Mason Appleton took a one-timer from the left faceoff dot and hammered it off the left post – the third time Lindback was bailed out by his metal companion. The Moose continued to pour on the pressure in the middle of the third, controlling the puck at will in the offensive zone, but were unable to beat Anders Lindback. Their momentum was stifled when Niku was forced to take down an Admiral – who would have had a clear breakaway – with about 7:30 left in the third. While they killed off the penalty, they weren’t able to re-ignite the attack, and went down quietly in the final minute without any great scoring chances.

-Brendan Lemieux’s second period goal ended a Moose scoreless streak of over 170 minutes which stretched back to February 11th in Cleveland. To put that in perspective, the Moose had previously only been shutout one time all season – January 19th vs. the Texas Stars.

-The Moose record on the season sits at 32-14-7, but there’s a pretty stark contrast in that record with and without Jack Roslovic – 24-5-3 with him in the lineup, 8-9-4 without. There have been other players out of the lineup over that stretch (Petan, Hutchinson/Comrie, etc.), but Roslovic has been the biggest loss to the Moose

-Sami Niku was the most dynamic player on the ice for the Moose, as he has been on most nights with Jack Roslovic not in the lineup. He made several good pinches down low in the offensive zone and created dangerous scoring chances in the slot, including ones for Spacek and Lemieux. His offensive acumen is near elite at the AHL level, and it’ll be fascinating to see if/how much of that ability will translate to the NHL level.

-Michael Spacek had at least four great scoring chances in this game, including three on one shift on the powerplay. He left pointless, with a cross bar and a bevy of missed opportunities, but was dangerous throughout the game. It’s been interesting to see how a rookie who was primarily thought of as a playmaker has become such an assertive and reliable trigger man on the powerplay. Spacek – who’s tied for the team lead in power-play goals (7) – had almost twice as many assists (91) as goals (48) in his WHL career. Interestingly, he was not one of the 6 skaters on the ice in the final seconds of the game as the Moose tried to tie the game.

-Mason Appleton was very quiet early on, but really came on in the third period. He started the play on the game’s second goal, nearly tied the game partway through the third, and had a number of good chances, zone entries, and puck touches as the game went on. Although he’s still creating chances, it’s clear that he’s missing playing with other creative players like Roslovic and Petan, as he doesn’t have as many opportunities as he did with those two by his side.

-Brendan Lemieux used his shot well tonight, opening the scoring and hitting a post, and also skated well for most of  the night. He also made a few giveaways today, and while they didn’t result in any chances against, it’s an ongoing cause for concern in his game.

-Jansen Harkins was far more involved in the play today than he was earlier this season, getting a lot of touches on the puck in the offensive zone, setting up plays, and almost scoring on a deflection in front early in the first. For a guy who’s played mainly on the 4th line this season, today’s game was a good opportunity for him to get into the top-9 and play with more skilled players. As a result, he began to look more confident than he has at any time in his rookie season.

Wednesday, February 21 at Bell-MTS Place in a rematch vs. Milwaukee.