Where are they headed next season? A look at the Winnipeg Jets 2019 draft class

Looking at where the 2019 draft class will be spending next season.

While the previous eight posts in this series have been a retrospective of the Jets Draft classes with a ‘Where are they now’ angle, the 2019 draft just occurred in Vancouver eight weeks ago so this is more of a look at where the Jets draft picks will be spending the 2019-20 season.  Of the nine drafts the Jets have participated in this was the one where they made the least amount of selections (five). 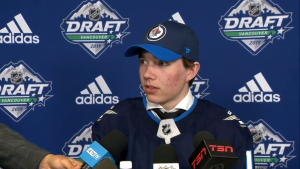 This 1st round pick was a well traveled one as it originally belonged to the Jets before they dealt it to New York at the trade deadline for Kevin Hayes with the Jets also sending the Rangers forward Brendan Lemieux as well as a conditional 4th round selection in 2022 (the condition was not met as it required the Jets to win the Stanley Cup).  Wanting to be back in the 1st round, Jets GM Kevin Cheveldayoff swung another deal with the Rangers, sending RFA defenceman Jacob Trouba to New York for defenceman Neal Pionk and the 20th overall pick.

With that pick Winnipeg officially became Finnipeg when the Jets selected left shot Finnish defenceman Ville Heinola.  This marked the third straight 1st rounder selected by the Jets from Finland since 2016 (they didn’t have a 1st round pick in 2018).

Plenty has been written already about the talented defenceman who, since the draft at the end of June, has signed a three-year ELC with the Jets and showed quite well at the World Junior Summer Showcase in Plymouth, Michigan at the end of July/beginning of August.

Heinola is scheduled to suit up for Lukko of the Liiga next season.

For the second straight year the Jets went to Sweden for their 2nd round pick this time taking right-shot defenceman Simon Lundmark of Stockholm who was playing for Linkopings HC of the SHL.  When we spoke to him after his selection by Winnipeg he described his two best attributes as “hockey sense and passing”.  In advance of the draft it seemed he was commended for his positional play.

We didn’t get a chance to see Lundmark after the draft when the Jets held their prospect development camp as he returned back to Sweden where he is set to play once again with Linkopings HC in the 2019-20 season.

This was the last piece of the deal back in June of 2017 between the Jets and Golden Knights ahead of the Expansion Draft when Vegas agreed to swap 1st round picks in 2017, this 3rd round pick in 2019 and select Chris Thorburn in the Expansion Draft.  This pick thereafter went from Vegas to San Jose to New Jersey who eventually selected defenceman Michael Vukojevic of the Kitchener Rangers.

This one was probably the most intriguing pick to me by the Jets when they selected Finnish forward Henri Nikkanen, who was a projected 1st Round pick coming into his draft season but whose draft stock fell due to injury.  Of course this could be to the benefit of Winnipeg as they will be getting a very motivated player looking to prove teams wrong for passing on him in Vancouver.  Nikkanen said he models his game after Mikko Koivu and if he can reach that level it would be downright larceny by the Jets.

For now the centre has another year on his deal back home in Finland with Jukurit in the Liiga and is already scoring in preseason action.

With the Jets knowing they wouldn’t be signing free agent to be (at the time) Kevin Hayes they dealt his rights to Philadelphia and received back this 5th round pick.  With it the Jets went a province over when they took Saskatchewan product Harrison Blaisdell with their 5th round selection who described his style of play to us after he was drafted as he “models himself after Brad Marchand” and you could see a bit of that when he was in Winnipeg for the Jets Development Camp.

The left shot centre will be spending time just south of us here in Manitoba as he is set to attend the University of North Dakota next season.

Prior to the 2019 Draft the Jets had only selected one player from the BCHL (Matt Ustaski with their 7th round pick in 2014) but with their selection of goalie Logan Neaton it made it back-to-back picks from this Junior A league out west.  Neaton led his Prince George Spruce Kings to their first ever Doyle Cup championship and a runner-up spot in the National Junior A Championship.

The Michigan born Neaton will be heading to UMass-Lowell next season which is the alma mater of current Jets starting goalie Connor Hellebuyck.  With Hellebucyk also being a Michigan product and was a 5th round pick in 2012 there has already been a lot of talk about this parallel path.

When the Jets acquired defenceman Nathan Beaulieu at the trade deadline on February 25, 2019 they sent this 6th round pick to Buffalo in exchange.  The Sabres subsequently traded this selection to the Canucks and Vancouver took winger Karel Plasek of HC Kometa Brno (Czech Extraliga).

This is the second last piece of the puzzle from the June 30, 2018 trade between the Jets and Habs which saw Montreal receive Steve Mason, Joel Armia, this pick and a fourth-round pick in 2020.  Regarding that 4th rounder in next year’s draft it is now the second time the Jets have traded it away as it was a conditional pick made available in the trade between the Jets and Blues when Winnipeg acquired Paul Stastny (but since St. Louis signed Erik Foley they didn’t get the pick).  Montreal took defenceman Kieran Ruscheinski of the Calgary Northstars (AMHL).

This concludes our series looking back at the Jets draft classes to 2011.

Where are they now? A look back at the Winnipeg Jets 2018 draft class
Winnipeg Jets Ground Control Podcast: A chat with coach Paul Maurice