Meet the Jets 5th round pick (via the Flyers). 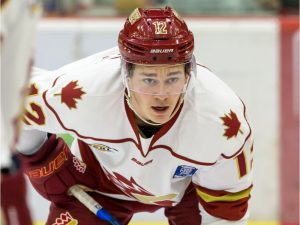 The Jets have taken their first Canadian of the draft as they selected left-shooting centre Harrison Blaisdell who plays for the Chilliwack Chiefs of the BCHL and is committed to University of North Dakota.

Here is what draft geek has to say about him:

Blaisdell is a fairly balanced threat offensively, blending goal scoring and vision into a dynamic package. His shot is high end and he has the release to go along with velocity and pinpoint accuracy. His two-way approach and attention to detail defensively often drive his offensive game through a “create a turnover and transition it up ice very quickly” style of play. Consistently one of the hardest workers on the ice, the current Chilliwack Chief is a catalyst for his high-powered line with his tenacity and dogged puck pursuit in all zones on the ice. Blaisdell has a good frame and has some surprising strength despite what some people may view as a lack of height standing at 5’11 (father Mike, an NHL’er in the 80’s, stood at 6 ft.). His wide stride and strong edge control allow him to maintain body positioning and control in contact situations. A fantastic skater, the former Pat Canadian plays the game with tremendous pace, flying up and down the ice. His quickness isn’t limited to his feet, however, as he possesses hands that are capable of keeping up with his lower body movements, often leaving opposing defenders in the dust or in a pretzel. More likely to score goals off of the rush with his blazing speed, change of pace and precision edge control that puts rivals on their heels, but is equally adept in the puck possession game, keeping his eyes up in the offensive zone with the puck on his stick. Blaisdell is able to back off defensemen with his speed which opens up lanes for his teammates, or exploit lanes himself with bursts of speed to create breakaway or partial break opportunities. The hands and stick handling ability displayed in Bantam as a Yale Lion are still evident today only with an added two plus years of progression which has been very beneficial.

Overall, Blaisdell is a complete two-way center that plays a pro-style game and has significant upside. Wearing an “A” in only second year with the team, Harrison is clearly an on-ice leader within the organization, leading by example and playing in every situation. Likely selected in the second round of the upcoming NHL Entry Draft, his hockey journey will see him depart the comfy confines of Prospera Center in Chilliwack for the big time feel of Ralph Engelstad Arena at UND. Chiefs fans had better appreciate what they have before it’s gone!

Here is a good article about him.

We just spoke to him on the IC Hockey Show which will be posted soon.  You can listen to it here:

Did tell us he models himself after Brad Marchand.  Trains in the summer with Jets 2013 3rd rounder and current Manitoba Moose forward JC Lipon.