Meet the Jets 5th round pick. 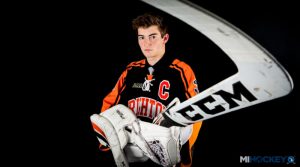 The Jets final pick of the 2019 NHL Draft was 20-year-old goalie Logan Neaton from Brighton, Michigan who played for the Prince George Spruce Kings of the BCHL. Neaton made 47 appearances for Prince George and went 32-8-5 with a 1.92 goals-against average, .914 save percentage and five shutouts. Neaton is committed to play for UMass-Lowell next season. A Michigan based goalie going to UMass-Lowell where have we heard that before? (Answer: Connor Hellebuyck).

You may remember this moment:

Neaton was not in attendance at the draft in Vancouver.