Jets GM Kevin Cheveldayoff wraps up the second day of the 2019 NHL Draft. 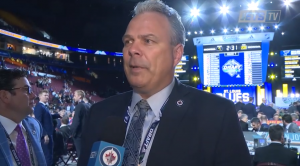 Scrum topics: Reflections on the draft weekend.  On the Jets being able to select Simon Lundmark at 51.  Prospects coming to Development Camp.  Was there any thought about getting into the 6th or 7th round?  What the week ahead looks like.  Crop of young players (Niku, Poolman, Vesalainen & Appleton) having a chance to make an impact.  His initial thoughts on the salary cap at 81.5 million. How hard is it to do his job without knowing the salary cap number until this late?  Thoughts on retiring former head of scouting Marcel Comeau.  Was he surprised by the lack of deals made at the draft?  Any progress with his pending UFAs?

You can also listen to his scrum from the draft floor in Vancouver here.