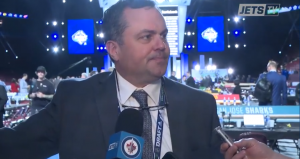 Scrum topics:  Reflections on Jets 5th round pick (134th) goalie Logan Neaton.  With only five picks is it quality over quantity?  When a player “falls” to where they are selecting.  Organizational depth on the blueline.  On watching a guy make an adaptation to the men’s game.  Willingness to pick players from all over the map/leagues.  On the philosophy in drafting a goalie.

Hillier said Manitoba Moose goalie coach (and former NHL goalie) Rick St. Croix checked out goalie Logan Neaton who Winnipeg took in the 5th round and he gave him the “thumbs up”.

Regarding organizational depth on the blueline “Especially the two kids (Heinola & Lundmark) we just added.  I think the NHL game now is guys that can go back, get the puck and turn it up ice and that’s what these two kids can do.  They can skate, they got skill, they can really pass the puck.  Lundmark can really pass the puck and Heinola is skilled.  That’s what the game is all about now.”

On his team’s willingness to draft players from all leagues: “I don’t care where they come from I’m just trying to find NHL players. That’s the bottom line.”  He even dropped a Finnipeg reference.