The Jets made a total of five picks (two centres, two defencemen and a goalie) 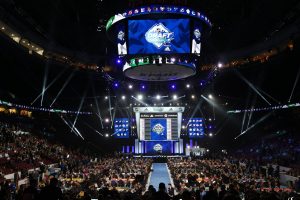 It was a busy Day 2 in Vancouver and in case you missed any of the action we have you covered.  The Jets made a total of five picks (two centres, two defencemen and a goalie):

We have all of the interviews (audio & video) available of the Jets draft selections that were in attendance at Rogers Arena.

Day 2 of the draft ended with Jets GM Kevin Cheveldayoff speaking with the media in Vancouver as well as a chat with us on The Illegal Curve Hockey Show which you can listen to here.  Jets Director of amateur scouting Mark Hillier reflected on the draft once it concluded and had some interesting comments on how his team did this weekend.  You can listen to that interview here.

There won’t be any time for rest as the Jets kick off their development camp on Tuesday (full schedule here) at the IcePlex.  I (@icdave on twitter) will be there as usual covering for illegalcurve.com.