A look at day 2 of Jets Development Camp. 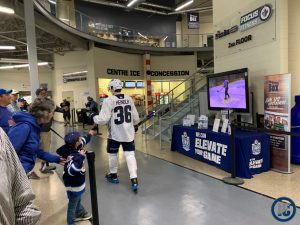 The Jets prospects and invitees hit the ice for what is day 2 at the IcePlex but their first day of on ice Prospect Development Camp today in Winnipeg. First up were the defencemen (with the goalies on another rink) which was followed up by the forwards.  Both the Jets and Moose coaching staffs were on the ice for today’s on ice sessions.

What he will work on this summer: “I am going to work on my skating.  Just get faster.”.

Whether Finland is taking over the organization: “We should maybe call this FinniPeg or something like that.  It is fun to have Finnish and Swedish guys here.”

Neaton was on family vacation on the dock when he got called by the Jets to tell him he was drafted “its the best feeling in the world to get drafted, especially to an organization like Winnipeg. Just a dream come true.”

He was asked about being on a similar path to Jets goalie Connor Hellebuyck (both drafted 5th round, both from Michigan, either attended/will attend UMass-Lowell) “I actually train in the off season with Connor in Michigan with the same goalie coach”.

When asked about the injury which dropped him from being considered a 1st rounder this past weekend (instead falling to the Jets in the 4th round) he indicated “It was really frustrating.  I had big expectations for the season.  The injury came slowly.  It didn’t come in one game.  I was away for a long time.  But I think it made me little bit stronger mentally because of the comeback I am going to have here.  I’m really happy the Jets picked me and I think I am going to have a great future here.”

Describing his style of play “I play with my great hockey IQ.  I see the game really well.  I am centre who can play both ways so I like to score and make points but I am still good at defensive zone.”

Said he models his game after Mikko Koivu.

He has one more year on his deal next season in Finland.

The players will be back on the ice tomorrow at the IcePlex starting at 10:00 AM.