Where are they now? A look back at the Winnipeg Jets 2018 draft class

Looking back at the Jets 2018 draft in Dallas.

We started this week off with a look back at the 2017 Draft class for the Jets in Chicago and today we head south to Dallas for a look at the 2018 class.  As folks around here know the 2017-18 Jets were the first team in Winnipeg NHL history to go all the way to the Western Conference Final, ultimately losing to the Vegas Golden Knights.  It also meant that they would have the third last pick of each round which was the lowest draft spot they had since relocation.

In order to acquire centre Paul Stastny from St. Louis the Jets sent this pick to the Blues along with prospect Erik Foley (2015 3rd rounder) and a conditional 4th round pick in 2020 (which condition was the Blues needed to sign Foley before Aug 16, 2019 which they did and which meant the Jets would retain the pick). Winnipeg would subsequently send that 4th round pick to the Habs when they made the Steve Mason/Joel Armia trade to Montreal four months after the Stastny trade.

With all the focus on Finnish players with the Jets top pick in 2018 they went across the Gulf of Bothnia to southern Sweden to take centre David Gustafsson of Tingsryd. Gustafsson played for HV71 during his draft year (same team as Jets 2014 4th rounder Jacob Cederholm who played there during the 2017-18 season).  Described as a strong, two-way centreman  he was injured the season following his draft year so he didn’t get into quite as many games in the SHL as he had the previous year.  Earlier this summer the Jets signed him to a three-year ELC.  Might he come to North America next season or will he stick with HV71? 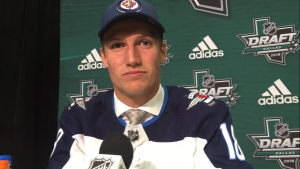 The Jets went to sunny Tampa, Florida to make this pick taking Nathan Smith, a 5’11” 177 lbs left shooting centre who played for Cedar Rapids of the USHL with a commitment to Minnesota State Univ (Mankato) for the 2019-20 season (same school attended by Jets 2014 5th round pick CJ Suess).  Smith told us after he was drafted that he began playing roller hockey at the age of 6 and didn’t turn to ice hockey until the age of 11.  At the time he was picked Chris Peters, who is a prospect analyst for ESPN, said “Winnipeg landing Nathan Smith is a really interesting one. He was playing Florida high school hockey in 2016-17. Made the jump into the USHL with Cedar Rapids and despite the huge gap in competition put up 47 points in 51. This could be another one of those Winnipeg sleepers.”  Smith finished his second year in the USHL leading his team in points.  Next up for this prospect will be taking a 3.5 hour trip northwest from Cedar Rapids to Mankato to begin his college career next season in Minnesota.

The Jets sent this pick to the Habs at the trade deadline in February to acquire Joe Morrow.  Montreal would trade the pick to the Flames and Calgary selected Slovakian centre Milos Roman.

This pick came to the Jets via the Drew Stafford trade to the Boston Bruins back in 2017.  It was a conditional 6th rounder but became a 5th rounder because the Bruins made the playoffs and Stafford played in 50% of the games.

With this pick Winnipeg took left shot defenceman Declan Chisholm who was playing in the OHL with the Peterborough Petes.  After Chisholm’s third season in junior came to a conclusion, which saw him more than double his points from his second year (48 points in 67 games), he was signed by the Moose to an ATO.  While he didn’t get into any games he did have the opportunity to practice with Manitoba as they pushed hard for a playoff spot.  This summer he was added to Team Canada for the World Junior Summer Showcase.  If you look at the Jets history with their defence prospects in the CHL they tend to have them play four years of junior before we see them turning pro so you can likely expect Chisholm back in Peterborough to continue his development next season.

With their second pick of this round the Jets went back to the OHL and selected another left shot defenceman taking Giovanni Vallati from the Kitchener Rangers.  Vallati was unexpectedly traded to the Oshawa Generals following the 2018 Draft and he saw a big improvement in his points totals the following season (48 points up from 26 points the previous season).  As with Chisholm the expectation is for Vallati is to spend another season of junior in the OHL with Oshawa before he makes the jump to pro hockey.

Here is a good read on both Chisholm and Vallati.

For the second straight draft the Jets would take a goalie in the sixth round this time selecting Minnesotan Jared Moe who was playing for the Waterloo Black Hawks in the USHL.  After two years of Tier I junior he is headed due north from Iowa to the University of Minnesota to play for the Golden Gophers in 2019-20.

For the first time the Jets drafted a player out of the AJHL when they took Alberta product Austin Wong who was a centre playing for Okotoks Oilers with a commitment to play at Harvard for the Crimson.  The player described as a “human wrecking ball” will be heading to Cambridge, Massachusetts for the 2019-20 season.

Next up: We conclude this series with a look at the recent 2019 NHL Draft in Vancouver.