Status of injured Winnipeg Jets players and projecting their return

Taking a look at the Jets skating wounded. 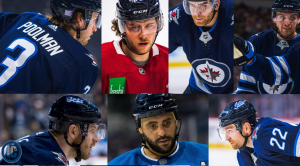 The Jets last played on January 22nd when they completed their schedule ahead of the NHL All-Star weekend festivities and Player break which runs until January 30th.  The team has a number of players who are on the shelf in addition to those who were playing with bumps, bruises and worse.  So while the entire club can likely use the time to rest up and heal some of their wounds it will be especially helpful for a number of players, some of whom are on the cusp of a return to the lineup.

The East Grand Forks product was injured in a game on January 12th when the Nashville Predators were in Winnipeg for a game.  Poolman was ruled out by his coach the next day to play during the homestand but was considered a possibility for the three-game road trip.  However Poolman wouldn’t play in any of the games on the road.  Projected Return:  Unless there is more than meets the eye it would seem reasonable that he will be ready to return on January 31st when the Bruins are in the city.

The veteran defenceman has missed quite a few games this season and on December 31st he didn’t play the last few minutes of a game against the Avalanche in Colorado.  Beaulieu was ruled out for a month which would have him projecting to return next week although it should be noted that coach Maurice qualified his timeline by saying “He’s out for a month. Minimum.”.  Projected Return: Provided the timeline remains accurate Beaulieu should be ready to go for the start of the upcoming homestand or thereabouts.

On January 19th in Chicago an unsuspecting Lowry took a blindside hit from the Hawks Drake Caggiula.  The next day Coach Maurice provided an update saying that it would be a month before they were talking about his “re-entry”.  Projected Return:  Third week of February.

With the Jets dealing with injuries to Beaulieu, Poolman and with veteran defenceman Dmitry Kulikov at the time dealing with the flu, Dahlstrom finally got back into lineup and was having a solid game during the Jets 4-0 win over the Vancouver Canucks.  But he would leave the game and not return for the 3rd period after being ruled out with an upper-body injury by Jets PR.  A few days later Coach Maurice advised that he would be out a minimum of six-weeks with a broken bone in his hand.  Projected Return: Beginning of March.

On October 19th Letestu was placed on IR and the only information provided was “Mark we’ve shut down.  He’s gotta get some tests done.  That will happen at the end of the month and then I’ll be able to give you a clean idea of what we’re dealing with.”.  At the end of the month Maurice provided a health update which indicated that Letestu was being shut down for six months due to myocarditis which was described as a virus in his heart but the expectation was he would get back to full health.  Projected Return: If he does return at all this season it would seem unlikely before April.

It was a scary sight seeing the veteran centre down on the ice after taking a puck to the side of the head via a slap shot in the 3rd period of action in a game against the New Jersey Devils.  About a week later Maurice indicated that the shot had perforated Little’s eardrum and left him dealing with vertigo.  On December 3rd when asked about leaving Blake Wheeler in the middle even when Bryan Little returned the coach said “That option is definitely open yes. But that’s two months away or whatever, I don’t know. We’ll see when we get there.”.  In January Little started to join his teammates on the ice wearing a yellow non-contact uniform with the Jets bench boss advising that Little is “heart rate restrained right now”.  Little did join the team on their recent moms road trip.  Projected Return: Maybe February.

While this is obviously a different situation than the ones above due to the fact that he is suspended by the club he is still dealing with an injury.  On October 30th Bob McKenzie of TSN reported that Byfuglien had ankle surgery which Elliotte Friedman of Sportsnet indicated had taken place the week prior and that the recovery time would be around the new year.  TSN hockey insider Darren Dreger chimed in with it being approximately four months (sometime in February) for recovery.

On December 17th Jason Bell and Mike McIntyre of the Winnipeg Free Press reported that “Byfuglien has started a post-surgery rehabilitation program in consultation with the Jets that brings him closer to a potential on-ice return with the team later this season”.  Fast forward to January 8th when Dreger indicated that Byfuglien “has reached the point in rehab from surgery where he needs to test the ankle on ice”.  Which takes us to last week (January 23rd) when Dreger was chatting with the guys on the Afternoon Ride and said he doesn’t believe that Byfuglien is skating yet.  Projected Return: ??