The Jets 3rd line centre gets taken out by blindside hit. 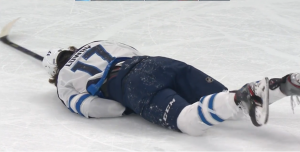 The Jets lost a big piece of their team when third line centre Adam Lowry was forced to leave the game with an upper-body injury late in the 1st period.  He took a blindside hit by Drake Caggiula.  If you missed it check it out here:

Jets forward Adam Lowry exits the game with 16 seconds remaining in the first period after taking a hit by #Blackhawks forward Drake Caggiula, who was given a two-minute interference penalty on the play. pic.twitter.com/JILqUx7u3N

We shall have to wait to see what his status is following the game.

Jets coach Paul Maurice says no update on Adam Lowry. Indicated that Lowry will be tested on Monday.

But here is what Murat Ates of The Athletic Winnipeg had to say:

No official update on Adam Lowry but he walked through Winnipeg’s dressing room with his left arm in a sling. Looks like his left shoulder in some capacity.