The veteran defenceman from Strathroy, Ontario will be out at least a month. 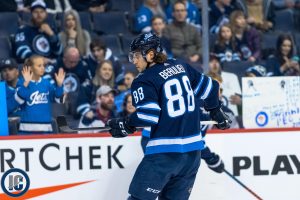 Today Jets bench boss Paul Maurice indicated that defenceman Nathan Beaulieu will be out at least a month with a lower-body injury. Beaulieu didn’t play the final five or six minutes of the 3rd period on Tuesday in Denver, Colorado.

Coach Maurice indicated “He’s out for a month. Minimum.” When asked if it was related to the previous injuries the Jets bench boss said “No, brand new one.  The silver lining.  He’s got two breaks that he’s healed from that will completely heal. He’ll be fine. That’s the positive.”

In 21 games for the Jets this season Beaulieu has no goals and four assists.

It has to be frustrating for Beaulieu who began the season by missing a month after he sustained an injury in the final pre-season game.  Then at the end of November he sustained another injury that saw him placed on IR.

The Moose are on the ice for practice and the Jets will announce the recall once they finish up.  Update:  Jets have recalled Sami Niku.