Niku heads back up to the big club. 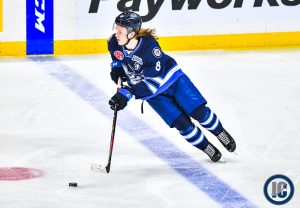 It has been an up and down season for Sami Niku who was expected to have a role in the Jets top six to start the season but due to a less than ideal training camp (car accident & injury) he began the year with the AHL’s Manitoba Moose.

Niku would play two games in the AHL before he was recalled for the first time on October 7th (he played for the Jets against the Pittsburgh Penguins on October 8th but was then re-assigned back to the Moose on October 10th).

The 2015 7th round pick played October 11th for Manitoba but the injury bug reared its ugly head and took him out of the lineup until November 2nd.  Niku would play 13 straight games for the Moose before an injury on November 27th cost him another month of his season.  The puck moving defenceman returned to the lineup on December 29th and in the two games he has played he picked up two assists. In the last contest for the Moose he looked very much like the Sami Niku we have become accustomed to watching.

Niku has switched back and forth between the left and right side this season for the Moose as he has the ability to play either side which has allowed the AHL club to get some of their younger prospects (Gawanke, Kovacevic into the lineup on the right side when Niku switched to the left).

In 18 games with the Moose Niku has three goals and 11 assists.

With the news that Nathan Beaulieu is on the shelf for a minimum of a month the Jets announced they have recalled Niku from the Moose.