Winnipeg Jets Injury News: Tucker Poolman out for rest of homestand, may return before player break

The Jets right-side defender will be out at least a week. 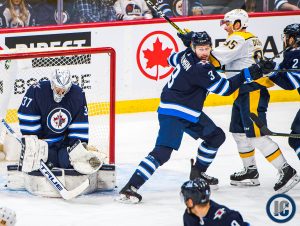 Just when the Jets were getting a little crowded on the backend they lost Tucker Poolman in the 1st period of yesterday’s game against Nashville.  After initially heading down the tunnel he returned to the bench in the opening frame but didn’t take another shift.  Jets PR indicated he was done for the night with a lower-body injury.

Today following Jets practice head coach Paul Maurice was asked for an update on Poolman’s status and he indicated “He’s out for the homestand. I guess there’s a chance that he may play for us maybe by the end of the trip, the road trip.  If not, then we would be reasonably confident that he is a player coming out of the break.”.