Following their loss to the Preds the Jets hit the ice to get ready for the Canucks. 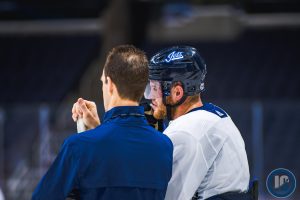 The Jets are back on the ice as they try to leave their 1-0 loss to the Predators on Sunday afternoon in the past and look ahead (and up) to the Vancouver Canucks who will be here in Winnipeg on Tuesday and who currently sit two points ahead of them in the standings.

As per Ken Wiebe of The Athletic Winnipeg no Tucker Poolman this morning at practice.  Bryan Little is however skating while rocking the yellow, non-contact jersey.  Lines and D pairs listed below also via Ken.

Blake Wheeler on what Andrew Copp can bring to his line, importance of having someone whose game is easy to read and whether there is an urgency in accumulating points.

Andrew Copp on what he hopes to brings to the Jets second line, how much he looks forward to the opportunity, whether he feels like is playing at same level that he was prior to his injury, seeing Little on the ice, tinted visors, urgency for Jets to accumulate points & more.

Luca Sbisa on being a “healthy enough scratch”, being ready to draw back into the lineup, the constant change on the blueline, facing his old squad in the Canucks and the plan when they face Vancouver.

Coach Maurice:  Tucker Poolman update.  How do they fill Poolman’s spot?  What is he hoping to get out of Andrew Copp on the Wheeler line?  Does he think Copp has played at the level that he was at before the injury?  Is there a fallout in taking Copp off Lowry’s line?  On Sami Niku playing big minutes.  Is there any urgency lacking from the team?  What has Anthony Bitetto done to carve out a role on this team?  How does he quantify the value of a glue guy?  Was it easy for Bitetto to ‘find his voice’?  Is he building this team to be a counter-puncher?  Productive zone time.  What is the next step for Bryan Little?  A team having a ‘shift disturber’ and is that something they are missing?

Today following Jets practice head coach Paul Maurice was asked for an update on Poolman’s status and he indicated “He’s out for the homestand. I guess there’s a chance that he may play for us maybe by the end of the trip, the road trip.  If not, then we would be reasonably confident that he is a player coming out of the break.”.

The Jets take on the Canucks tomorrow night at Bell MTS Place at 7 pm.  Be sure to keep it locked to illegalcurve.com for the AM Papers which go live at 7 AM.