Note:  The Jets were back on the ice on Monday to practice as they got ready for tonight’s game against the Sabres.  Following practice there were health updates on Patrik Laine, Luca Sbisa and Mark Letestu.  The only one relevant ahead of the game against Buffalo is that Patrik Laine, who is dealing with a swelling after he blocked a shot, will take morning skate although his status remains up in the air.  With morning skate for Winnipeg getting underway at 10:30 AM CST be sure to check back for our pre-game report.  Puck drop is at 7 PM CST.

Note II:  The Moose had the day off on Monday but they were making some news as the Jets and Kings worked out a deal to reassign players to the other’s AHL squad.  From Manitoba went Michael Spacek to the Ontario Reign while the Reign sent defenceman Daniel Brickley to the Moose.  Manitoba will practice today at 11 AM CST as they get set for the Iowa Wild later this weekend. 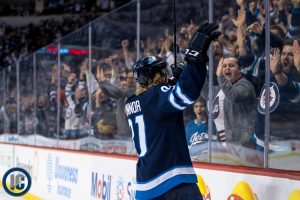 Winnipeg Sun: Jets set to ice best six defencemen as Morrissey returns to health, paired with DeMelo.  I like how Scott had to preface his question to the Jets coach with “I don’t want to jink it….” to which Paul Maurice interjected “I appreciate that but you’re gonna”.  When you look at the six it really will be a more solid group than they have had available for some time.

Winnipeg Free Press:  Morrissey eager to suit up vs. Sabres after missing last four games.  (Paywall).  He will be a welcome addition to the D group.

Winnipeg Free Press:  Little rest in store for heavy-duty Hellebuyck.  (Paywall).  While he won’t be playing all 15 remaining games you have to believe he will be facing a big workload with points at such a premium.

Winnipeg Jets and L.A. Kings each reassign a player to the other’s farm club
Game 68: Jets vs. Sabres projected lines