Some health news on the Jets skating wounded. 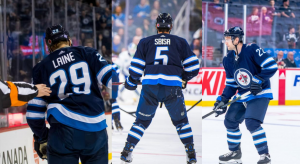 Maurice indicated that Patrik Laine will take the morning skate on Tuesday. Laine is dealing with a bruise and Maurice said that the swelling has to come down.

With respect to Mark Letestu the Jets bench boss said “He’s at day one. When he got shut down it was completely shut down.  The heart rate couldn’t get over just slightly above active for the longest period of time.  So our 30 minute skate today would have been all the man could handle.  He got up the ice pretty quick.  So he’s at stage one.”

Both Adam Lowry and Mathieu Perreault skated in non-contact uniforms but coach Maurice didn’t get asked about them in his availability.  I believe this is the first time that Perreault has skated with the group since suffering the injury back on January 31st.

On the positive side for Winnipeg both Josh Morrissey and Carl Dahlstrom wore regular jerseys during practice.