After a day off on Sunday the Jets hit the ice for practice today to prepare for the Sabres. 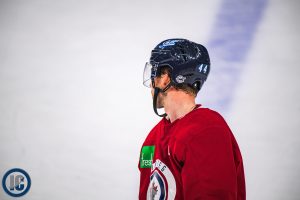 The Jets list of skating wounded is a long one and with a day off on Sunday it will be interesting to see how many guys are back and ready to return to the lineup as they get ready to face the Sabres on Tuesday.  The team didn’t make any recalls from the Moose ahead of the skate at Bell MTS Place which is a good indication that they will have some healthy players back on the ice today.

According to Scott Billeck of the Winnipeg Sun there is some good news for the Jets as defencemen Josh Morrissey and Carl Dahlstrom are in regular uniforms.  Additionally he adds that Adam Lowry, Mathieu Perreault and Mark Letestu are in non-contact jerseys.  However he indicated no Patrik Laine for today’s practice or Luca Sbisa.

Letestu is somewhat unexpected as coach Maurice had said he was being shut down for six months as of October 31st due to a myocarditis which would have put his return to April ish.

Ken Wiebe of The Athletic Winnipeg provides the lines and D pairs listed below.

Dylan DeMelo on playing in the top pairing with Josh Morrissey, being comfortable in the Jets system, getting a bit of breather between games, facing the Sabres and explaining how they’ve shut teams down defensively as a five man unit.

Josh Morrissey provided an update on how he is feeling, playing with Dylan DeMelo, frustration missing games at this time of year and the challenge of playing with a new D partner.

Coach Maurice:  Update on Patrik Laine.  What does he see in the pairing of Josh Morrissey and Dylan DeMelo?  Some breaks between games in March.  Best defensive lineup he has had this season?  Assessment of DeMelo’s game.  Update on Mark Letestu?  Update on Luca Sbisa?  Can they afford not to play Connor Hellebuyck in the next 15 games?  Strength of the Connor-Scheifele-Wheeler line.  Are they getting enough secondary scoring?  Getting Roslovic up-to-date on the power play.

Coach Maurice indicated that they will put Patrik Laine in the morning skate on Tuesday.  Said he is dealing with a bruise and that the swelling has to come down.

With respect to Mark Letestu the Jets bench boss said “He’s at day one. When he got shut down it was completely shut down.  The heart rate couldn’t get over just slightly above active for the longest period of time.  So our 30 minute skate today would have been all the man could handle.  He got up the ice pretty quick.  So he’s at stage one.”

The Jets will take on the Sabres tomorrow at 7 PM CST.  Be sure to keep it locked to illegalcurve.com for the AM Papers which go live at 7 AM.