Note:  The Jets were off on Sunday following their one-game road trip to Edmonton on Saturday.  The team did make some news on Sunday morning when they announced they had reassigned Nelson Nogier and CJ Suess to the Moose.  The Jets list of skating wounded is a long one but we will have to wait and see if they recall anyone from Manitoba before practice gets underway at 11 AM CST.  Be sure to check back for the Practice Report with the latest news and audio.

Note II:  The Moose picked up a pair of overtime wins over their division rival Chicago this past weekend in Winnipeg which were an important four points but of course they did allow a team they are chasing to snag two points.  They are off today before they get back on the ice on Tuesday for a practice as they prepare for the Iowa Wild to conclude this four-game homestand.

The Athletic Winnipeg:  Subscriber Q & A with Nikolaj Ehlers.  Folks had the opportunity to submit questions for Ehlers and he provided some insight into his world.

Winnipeg Free Press:  Jets played the right way, despite loss to Oilers. (Paywall).  Can this group maintain the consistency necessary in their remaining games to make some hay?

Winnipeg Sun:  Heinola ‘comfortable’ in Finland, looking forward to Winnipeg return.  Scott had an opportunity to check in with one of the top defensive prospects in the system. 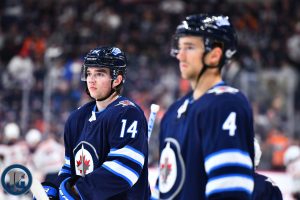 Winnipeg Sun:  Jets may rue the Leap Day that wasn’t.  Guess there is no place for a long memory in the Jets situation.