Winnipeg Jets and L.A. Kings each reassign a player to the other’s farm club

Jets and Kings each send a player to the other’s AHL club. 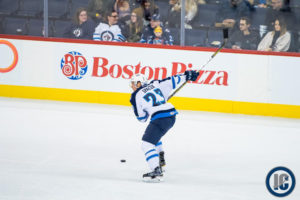 There were some interesting moves today for the Moose as Jets 2015 4th rounder Michael Spacek was reassigned by to the L.A Kings farm club (Ontario Reign).  Additionally the Kings reassigned second-year pro Daniel Brickley to the Moose.

It has been a disappointing season for Spacek. He has nine goals & 11 assists in 45 games for the Moose. He was recalled by the Jets back in November (somewhat surprisingly to my eye).  He just wasn’t having a consistent third pro season.

The Moose get back a left shot defenceman in second-year pro Daniel Brickley who played college at Minnesota State U – Mankato (where he played with Moose centre CJ Suess)  Brickley has only played 11 games this season due to an illness according to Moose play-by-play voice Daniel Fink.

The Moose play a pair of games this weekend in Winnipeg against the Iowa Wild.