A look at the game 68 projected lineups and pre-game audio. 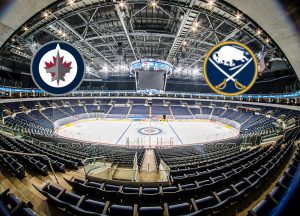 Nine days after they played and lost to the Sabres in Buffalo the Jets will wrap up the season series tonight in Winnipeg.  After playing a heck of a game in Edmonton on Saturday but coming away with no points there is a lot of pressure on the Jets to pick up a W against Buffalo.  The good news for the Jets is that while the Sabres have been very good in Buffalo they haven’t been quite so good on the road going 10-18-4 this season and they come into the game having lost their last three games.

The big question mark for the Jets is the status of Patrik Laine who is dealing with swelling after he blocked a shot but will still take part in this morning’s skate according to Jets bench boss Paul Maurice.  For now the lines and D pairs are based on yesterday’s practice.  They will be updated, if necessary, once skate gets underway or coach advises of any moves that will be made.

Scott Billeck of the Winnipeg Sun indicates that Patrik Laine and Mathieu Perreault are skating in regular uniforms today while Adam Lowry is in non-contact and Mark Letestu is back on the ice as his road to recovery enters day two.  Quite the leap for Perreault to go from not skating with the team, to non-contact on Monday to a regular uniform today.  Ken Wiebe of The Athletic Winnipeg adds that Connor Hellebuyck isn’t on the ice for morning skate and is expected to start tonight.

Coach Maurice said he expects Patrik Laine to play tonight and that Mason Appleton will move to the fourth line with Shore and Bourque.

Coach Maurice:  Update on Patrik Laine?  What did they learn from the Sabres game nine days ago?  Updates on Adam Lowry and Mathieu Perreault?  Does he notice a difference in Mark Scheifele’s game when he is playing with Blake Wheeler and Kyle Connor?  Is it a predictable game for the trio?  What are the possibilities for Mark Letestu?

Coach Maurice indicated that Mathieu Perreault is listed as day-to-day and that Adam Lowry is at the “tail end of the gold.  So we hope in the next two or three days that he’ll come out of that as well and move into contact.”.  Said because the injuries to the two are upper-body there will be a quick turnaround when they are ready.

Also added that Mark Letestu has been cleared to play but will need quite a bit of conditioning work.

The transcribed quotes can be found here.