Note:  The Jets had a busy morning on Wednesday as they claimed centre Nick Shore off waivers from the Leafs and placed Dmitry Kulikov on IR.  They followed that up with a busy practice in Winnipeg before they took off for Dallas.  Today they will look to keep their strong play against Dallas rolling when they complete the home and home series this evening at American Airlines Center.  Media availability at 11 AM so be sure to check back for our pre-game report.  Puck drop is at 7:30 pm.

Note II:  The Moose spent Wednesday traveling back from their seven-game road trip which ended in Rockford, Illinois on Tuesday night.  While they were transitioning back home their ranks were bolstered by the return of Michael Spacek who was reassigned to Manitoba by the Jets.  The team is scheduled to practice at 11 AM at Bell MTS Place as they get ready for a pair of games against the Wolves here in Winnipeg this weekend.

The Athletic Winnipeg:  I was wrong about Neal Pionk. I needed to find out why.  (Paywall).  Murat wasn’t the only person in the city who didn’t attribute full value when the deal was done but he goes in search of an answer as to why he reached the conclusion he did and what Pionk has done differently here in Winnipeg.

Winnipeg Sun: Appleton rues freak accident. While it has been sometime since the Heritage Classic he will have at least one more game to get back to 100% before he possibly gets back into the lineup where he will try to make the 4th line more impactful. 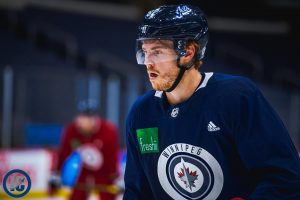 Winnipeg Sun:  Five Keys to the Game.  Scott’s big matchup involves Patrik Laine vs. anyone willing to stop him. His five keys to the game include: 1) Stop the rush. 2) Vezinabuyck. 3) Jets killer. 4) Offence on fire. 5) Rockin’ on the road.

Winnipeg Sun: Jets have Stars’ number.  Hockey is a funny game because while the Jets overall record against Dallas is 18-12-1 they have won 11 of their last 15 games.  And we don’t need to be reminded what Patrik Laine seems to do against Dallas every time he plays them (hint: it involves scoring).

Winnipeg Free Press:  Following freak football injury, Appleton ready to return… to hockey.  (Paywall).  Considering how hard he has worked to put himself into a position to be an everyday NHLer you know it had to kill the Wisconsin product to be missing games due to this type of injury.

Winnipeg Free Press:  Waiver wire pickup could lead to fourth-line shakeup.  (Paywall).  It will be really interesting to see what happens with the Jets 4th line.  It will also mean that the Moose will get a boost by whomever is reassigned to the AHL club.

NHL.com:  Copp has some familiarity with newest Jet, Shore.  Should probably say Shore’s younger brother Quentin who he played two seasons with on the U.S. National Development Team.

TSN: Hellebuyck proving he can be the rock the Jets can lean on.  Connor Hellebuyck is having an outstanding season right now, and even though he might have missed out on the Three Stars of the Month, there’s a bigger prize that many think he might be in line for. Sara Orlesky has more.

The Athletic:  2 Man Advantage Podcast.  The Jets captain Blake Wheeler spoke with LeBrun and Burnside about a wide range of topics.  Starts at 30:00 and runs to 45 minute mark.