A look at the game 29 projected lineups and pre-game audio. 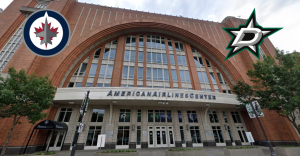 The Jets kicked off the home and home series with a dominant win on Tuesday and will be looking to replicate that effort for the fourth meeting between the Jets and Stars since November 10th and second in just two days.

It is an optional for the Jets this morning as has been the pattern with this club.  According to Ken Wiebe of The Athletic Winnipeg forward Gabriel Bourque has graduated from a non-contact jersey to a regular one.  Nathan Beaulieu is also taking part in today’s skate.  Until we hear from coach the Jets projected lines are simply based on Tuesday’s game against Dallas.

Coach Maurice has indicated that Nathan Beaulieu is healthy and will return to the lineup.  Carl Dahlstrom comes out.  Rest remains same as last game against Dallas on Tuesday.  Which obviously means newly claimed Nick Shore will watch tonight’s game from the pressbox.  Coach Maurice indicated he will do so with one of the Jets coach’s as he gets acclimatized to the Jets system.

Projected lineup for the Jets opponent comes via Sean Shapiro of The Athletic Dallas.  Looks like Alexander Radulov will be a healthy scratch.

Coach Maurice:  Lineup changes?  Plan for Nick Shore?  What does Nathan bring to the blueline?  On the carryover from Tuesday’s game that the Stars will bring to the game tonight.  Would he like to see more home and home or back to back games?  How has Nikolaj Ehlers taken his game to the next level?  On Ehlers going to the dirty areas.  Importance of shot blocking.  More on the Nick Shore waiver claim.

Puck drop is at 7:30 PM CST.  Be sure to head over to illegalcurve.com following the game for a recap of the action which includes post-game audio from the Jets room as well as from Coach Maurice.