Winnipeg Jets claim Nick Shore off waivers from the Leafs

Jets put in a waiver claim. 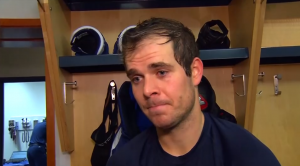 Centre Nick Shore has played 21 games for the Leafs this season but found himself on waivers.  In those 21 games he has two goals and one assist.  The 3rd round pick of the Kings in 2011 played last season in the KHL.

According to Chris Johnston of Sportsnet one other team aside from the Jets also put in a claim for the Denver, Colorado product.

Looks like the Jets will try to bolster the 4th line.  It could also mean that Jets 2018 2nd rounder David Gustafsson will be made available to play for Sweden for the World Juniors.  We shall have to wait and see.

The Jets also announced that they have placed Dmitry Kulikov on IR.