Note:  The Jets played one of their best games of the season last night as they dismantled the Dallas Stars 5-1 at Bell MTS Place to kick off a home and home series with their central division rival.  They are 17-10-1 on the season and currently sitting in 2nd spot in the central.  It was a busy morning ahead of their practice scheduled for 12 pm as they claimed centre Nick Shore off waiver from the Leafs and placed Dmitry Kulikov on IR.  They also reassigned Michael Spacek to the Manitoba Moose.   Be sure to check the Practice Report for the latest news and audio.

Note II:  Coach Maurice may have provided some insight into a timeline for injured centre Bryan Little.

Note III:  The Moose dropped their game in Rockport 4-2 last night which means they ended their seven game road trip 3-4-0-0 and are 12-12-0-0 (they are one of just three teams in the AHL that don’t have an OT or SOL this season).  Sami Niku missed his third straight game as he deals with an upper-body injury he suffered in Milwaukee last Wednesday.  With an assist in the loss Jansen Harkins took over sole possession of top spot in the AHL scoring race. He has six goals 22 assists for 28 points in 24 games for the Moose. I cannot call him the forgotten member of Jets 2015 draft class anymore.

Winnipeg Sun:  Jets roll on, crush Stars 5-1.   Scott breaks down the game with his recap of the events as he saw them last night at Bell MTS Place. 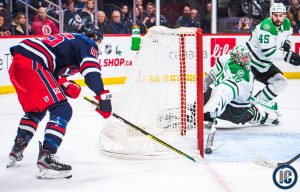 Winnipeg Free Press:  Jets down Stars, embrace importance of winning divisional matchups.  (Paywall).  If they can repeat that effort on Thursday to complete the home and home series sweep it would be quite impressive.

Winnipeg Free Press:  Is winning contagious as Jets dominate Stars with the Grey Cup in the house. (Paywall).  Mike ponders the impact of the Grey Cup could have played on last night’s action.  He looks back at the Jets win.

CBC:  Jets feed off Blue Bombers’ championship vibes in romp of division-rival Stars.  No doubt that the players appreciated seeing the Bombers and the fans certainly loved it.

Dallas Morning News:  Anton Khudobin gets little help as Stars fall to Jets in their ‘worst game of the year’. (Paywall).  Read about last night’s game from the perspective of a writer that covers Dallas.

CTV News:  Jets shine in dominant 5-1 win over Stars.  It was quite the statement win.

The Athletic Winnipeg:  Luca Sbisa’s long and winding road to Winnipeg.  (Paywall).  Ken writes about the journey the veteran defenceman has taken which has brought him to Manitoba to continue his NHL journey.

The Hockey News: Why the Jets’ Connor Hellebuyck should be considered a Vezina Trophy frontrunner.  If not for Hellebuyck where would this team be exactly?

TSN:  Jets net five goals against stingy Stars defence.  The Stars are one of the stingier teams in the NHL, but the Jets found a way to score five goals against them. Dennis Beyak and Kevin Sawyer break down Winnipeg’s offensive outburst on Tuesday night.