Note:  The Jets were back in Winnipeg and on the ice on Monday to practice ahead of today’s game against the Stars.  Following skate on Monday Coach Maurice did provide a health update on Dmitry Kulikov, Mason Appleton, Gabriel Bourque and Nathan Beaulieu.  Expect a further one today on Kulikov.  Morning skate is scheduled for 10:30 AM so be sure to check back for the pre-game report which will get you set up ahead of tonight’s game.  Puck drop is at 7 pm.

Note II:  The Moose were also back on the ice on Monday over in Rockford as their seven-game road trip will finally grind to a halt this evening when they take on the IceHogs.  Jets 2015 2nd rounder Jansen Harkins was named AHL Player of the Week as he had an incredible month of November.  Sami Niku wore a non-contact jersey on Monday so we will have to wait and see if he is ready to go for tonight’s game.  Puck drop tonight in Rockford is at 7 pm.

Winnipeg Sun:  At centre, Wheeler getting most out of himself, linemates.  While there isn’t any question that the move has proven to be successful I think the big question is what will happen when Little is ready to return to the lineup?

Winnipeg Sun: Jets Notebook.  Scott writes about Roslovic coming into his own and his development path.  Additionally he also discusses the Kulikov injury and Appleton’s as well. 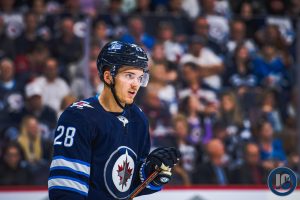 Winnipeg Free Press: Everything’s coming up ‘Rosie’ with Wheeler’s move to centre. (Paywall).  It really doesn’t come as much of a surprise that the kid we watched dominate the AHL is capable of taking his game to the next level at the NHL.

CTV News:  From the draft to the top-six: Jack Roslovic’s progression.  He has always been a very good passer but the Ohio product is showing an ability to score at the NHL level.