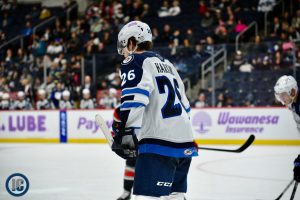 Jets 2015 2nd rounder Jansen Harkins has been on an upward trajectory since the second half of last season.  It was evident to those who watched him play that it was all starting to click for the North Vancouver product.

Last month it really all came together as he had points in 14 of the 15 games Manitoba played, ended the month with 24 points (4G 20A) total and is tied for 1st overall in the AHL scoring race.

Today the AHL named him Player of the Month for November.

He joins Jack Roslovic (November 2017) as the only Moose players to have won this award since the team returned to Winnipeg.