Moose keep the Wolves at bay with 3-1 victory 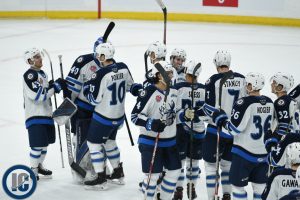 The Moose are back in Winnipeg for a pair of games this weekend at Bell MTS Place against the Wolves before they head out back on the road for five.  That will mean 12 of 14 games from mid November to the third week of December will have been played outside this province.  On their most recent road trip the Moose went 3-4-0-0 which put them at a 12-12-0-0 record (they are just one of three teams in the AHL without an overtime or shootout loss).

Unusual game.  The 1st and 2nd periods were pretty mundane.  The energy level for both squads seemed to rise a bit in the final frame and the Moose turned a 5 on 4 into a 5 on 3 thanks to a faceoff violation.  With four seconds remaining Kristian Vesalainen scored his fifth goal of the season on what was an intended pass by him which deflected in off a Wolves defender and past goalie Garret Sparks.  Skyler McKenzie added an insurance marker to make it 3-1 and seal the win.

Of course the most exciting moment was when Mikhail Berdin tried to really cement the game when he tried for the empty net and just missed.

With the win the Moose improve to 13-12-0-0 on the season. It was their seventh straight victory on home ice.

Coach Vincent updated Sami Niku‘s status saying the fleet footed defender will be out 2-4 weeks now that he has been evaluated here in Winnipeg.

The Moose finish off this back to back against the Wolves on Saturday night at Bell MTS Place.

You can start your Saturday with the latest Jets and Moose news and audio on illegalcurve.com at 7 am with the Morning Papers.  At 9 am the Illegal Curve Hockey Show on TSN 1290 Winnipeg will be live at Polo Park in conjunction with Toy Mountain for three hours of Jets, Moose and hockey talk.