The Jets are back in Winnipeg and getting ready for a home and home series against the Stars. 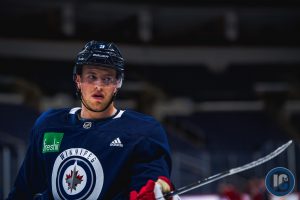 After a marathon road trip the past few weeks which saw the Jets play one home game game and seven away from Winnipeg since November 14th the squad is back in town as they get set for a home and home series against the Dallas Stars.

As per Scott Billeck of the Winnipeg Sun the only person missing this morning is Dmitry Kulikov.  Kulikov left in the 1st period of the game against the Ducks on Friday and coach Maurice indicated on Saturday that the veteran defenceman would be evaluated in Winnipeg.

According to Dennis Beyak, voice of the Jets on TSN, the lines and D pairs are back to how they began the game against the Kings on Saturday night (meaning Mark Scheifele and Adam Lowry have swapped back).

Coach Maurice:  Does he have an update on Dmitry Kulikov?  Does he have an update on Sami Niku?  What was his biggest takeaway from the road trip?  What has he seen from his power play?  His assessment of Connor Hellebuyck over the past month?  On Hellebuyck turning pucks into an opportunity for the Jets.  On Laine and Scheifele switching spots on the power play.  What have Roslovic and Ehlers done to facilitate Wheeler’s move to the middle?  On the path for Jack Roslovic.  On how Roslovic/Ehlers have learned to play like Wheeler.  Should there be surprise at how well Roslovic’s doing right now?  Update on Appleton and Bourque?  Would Appleton be a possibility for Thursday?  On Roslovic hitting his potential.  On Tucker Poolman exceeding expectations.

Player audio courtesy of TSN 1290 Winnipeg.  Thanks to Scott Billeck of the Sun for coach audio.

Coach Maurice didn’t have an update on Dmitry Kulikov as he expects a final answer this afternoon.  Said he won’t play tomorrow and will provide an update on Tuesday.  Mason Appleton is expected to wear a full jersey tomorrow during morning skate but the bench boss wants him to get more practice time in before he is considering him for a game.  When Gabriel Bourque is ready to return to practice it will be in a gold, non-contact uniform.  And he said Nathan Beaulieu was on the ice today in a limited manner but hopes it is less than a week for the veteran defenceman.  You can read his full quotes here.

The Jets will face the Stars tomorrow night at 7 pm CT.  Be sure to keep it locked to illegalcurve.com for the AM Papers which go live at 7 AM.